The recent heat wave that swept the world has resulted in cases of serious heat stroke in many regions of China. Even though workers have legal protections for workplace hazards including hot temperatures, many workers or their surviving families have struggled to have their heat stroke incidents recognised as workplace injuries, largely due to lack of formal labour contracts.

For example, on 5 July, a 56-year-old construction worker in the city of Xi’an collapsed on his way home from working nine hours in the heat, and he could not be resuscitated. According to his daughter, this incident could not be recognised as a work-related injury because Wang had not signed a labour contract. Further, Wang’s annual salary of 60,000 yuan had yet to be paid. It will be difficult for the bereaved family to recover any funds because of the informality of the labour arrangement. 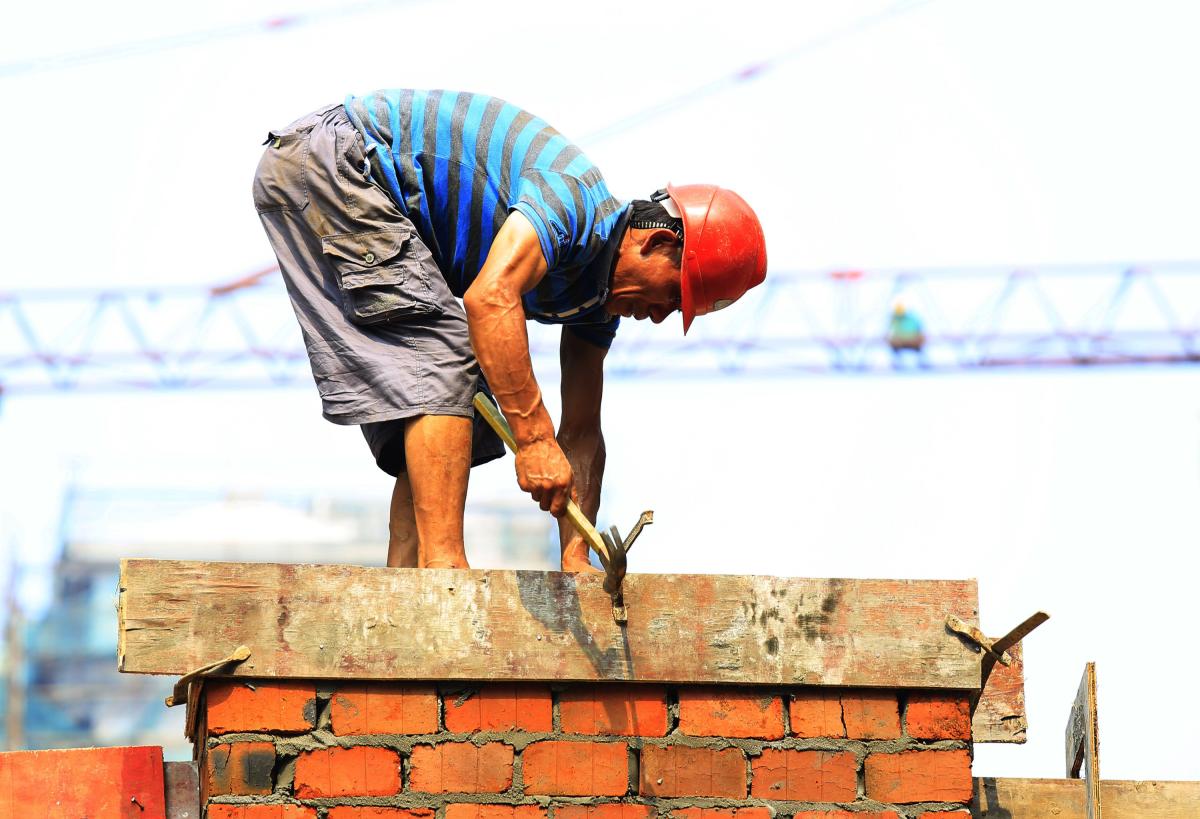 In another case, a 54-year-old dishwasher in Henan province was admitted to hospital on 25 June and later died on 7 July due to multiple organ failure caused by heat stroke. Her workplace injury also could not be legally recognised due to lack of employment records.

Heat stroke cases were widespread on construction sites. A tower crane operator in Huzhou, Zhejiang province, fell unconscious due to heat stroke on a 60-metre tower crane, and she was eventually rescued. Another worker fell to the ground from a 5-metre frame due to dizziness from heat stroke, causing multiple fractures.

Workers in the logistics industry also suffered from hot weather, posing a huge risk to both drivers and others sharing the roads. For example, a heavy trailer driver fainted near a toll station exit in Guiyang province, while another driver stopped on the road in Guilin province after suffering heat stroke and losing control.

The ACFTU has done little to help workers. In June, the union released a “Notice on the Work of Preventing Heat Stroke in 2022.” The Notice requires unions at all levels to urge employers to do the following: implement their responsibility of preventing heat stroke, provide protective gear, issue high-temperature allowances, and provide cooling devices. Playing off of the “send warmth” union campaigns, this new “send coolness” campaign of gifts to workers is, in CLB’s view, insufficient to protect workers’ lives. Instead, the union should organize workers at work sites to report hazards and unsafe working conditions, and protect workers who refuse to continue under seriously hazardous conditions, as outlined as the union’s express role under the Work Safety Law.

Employers discriminate against applicants who have recovered from Covid-19

An article published by Baijiahao on 12 July revealed the growing trend in Shanghai of employers rejecting workers who have already recovered from Covid-19. A migrant worker who contracted Covid-19 was left with no place to go because no company was willing to hire her. It was reported that she slept rough in a train station bathroom.

Labour agencies and companies routinely reject those with a Covid-19 history, even though they are not at risk of transmitting the virus. The discrimination is hard to weed out, although the State Council and the Shanghai municipal government repeatedly called for no discrimination against recovered Covid-19 workers.

An investigation conducted by Observer News found that factory management did not want workers with Covid-19 history for fear that a return of the virus to the workplace would lead to another round of work stoppages. The factory rejected workers on other grounds when the government explicitly ordered no discrimination. The problem shows the pressure of the pandemic on the operation of many factories in Shanghai, and the inability of the authorities to effectively regulate employers.

The urban unemployment rate for people aged 16-24 has only continued to rise after hitting a record high in April 2022, rising to 19.3 percent in June. Seasonal patterns dictate that the annual peak of this figure should occur during the college graduation season in July. In Shanghai, the overall urban unemployment rate reached 12.5 percent, much higher than in other regions. It is believed that the youth unemployment situation in Shanghai is more severe than the national level as well. 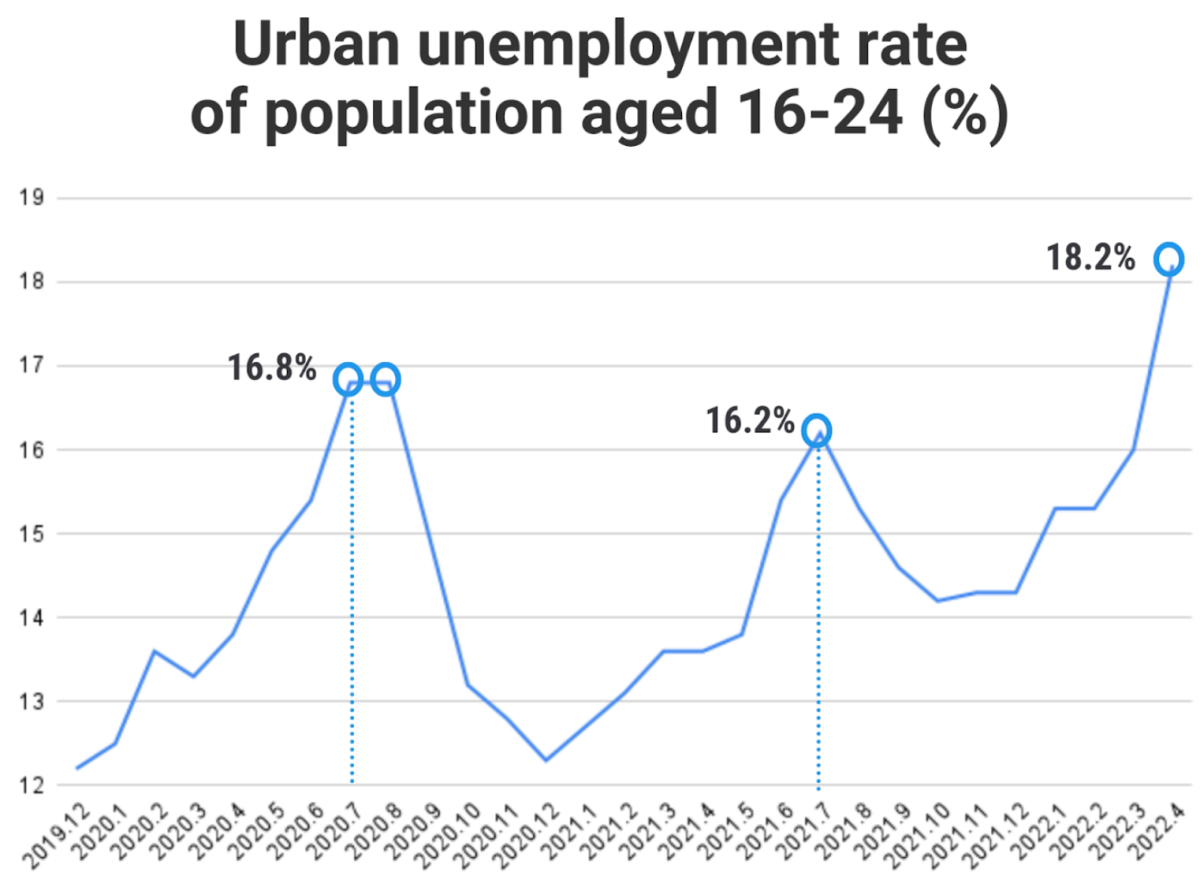 Meanwhile, the number of university students taking the civil service recruitment exam is also on the rise. The number of applicants exceeded 2 million this year, after the figure started to rise in 2019. In the 1980s, young people were keen to go into private enterprises rather than jobs within the government, but the latest trend is for young people to “return to the system” in the slowing economy.

Even civil service positions at the grassroots level are in high demand. The Paper reported that in one county in Zhejiang province, 24 graduates from top universities – including four PhDs and 19 master’s degree holders – entered the civil service. The city of Lufeng in Guangdong province gave a total of 1.5 million yuan in subsidies to professional and technical talents. These grassroots positions, although in third- and fourth-tier cities, are awash with generous benefits, covering living allowances, relocation fees and housing subsidies, attracting top talent who value the stability of the career.

At the same time as the rush of young people into the civil service for its job stability, Caixin reported (in a now-deleted article) that civil servants saw pay cuts in many regions. A section-level cadre in Shenzhen saw his income shrink by more than 20 percent. A deputy section-level cadre in southern Jiangsu province saw his salary cut by 25 percent, with about 100,000 yuan less money in hand this year. Grassroots-level cadres suffer an even higher cut. In Ningbo, a cadre saw his bonus cut by 40 percent, with overall income dropping by about one-third.

The wave of pay cuts has also affected all types of public employees, as tertiary hospitals and the education bureau are experiencing financial constraints. The Zhaotong Mental Health Centre in Yunnan province was reported to have forced doctors to return their night shift pay and performance pay for the period from 2015 to 2019, otherwise threatening to disqualify them from promotion. The local health commission demanded a total of 10 million yuan in recovery from the centre.

In another case, a hospital in Dandong, Liaoning province, has not paid salaries for several months, and the district’s health bureau responded that hospitals were not earning enough under the pandemic.

While wages and benefits shrank, the “iron rice bowl” that civil servants have enjoyed is no longer synonymous with easy work. The Initium interviewed public employees, who said that repeated pandemic waves have absorbed a large number of staff into virus prevention work. Cadres are burdened by ideological studies and party-building work, which have both become an increasingly important and time-consuming part of their jobs.

In early July, the Ministry of Transport called on four freight platform companies – including Huolala and Didi Freight – to refrain from price cutting and raising charges. The Ministry also now requires them to publicise their commission rates, set caps on membership fees, and eliminate safety hazards such as exceeding weight limits, illegally carrying passengers and transporting contraband.

Drivers pointed out that platforms charge “information service fees” on each order, in addition to membership fees. The commission rate of “highly valued orders” is typically set at 11 percent, but the platform now charges an additional nine percent, severely cutting the income of drivers.

Platforms are also sites for engaging in fraud. In a typical case, the perpetrator is the owner of goods and posts a shipping order on the platform, but then acts as a driver for the same goods, receiving the order they placed themselves on the platform. Then, the perpetrator seeks an actual driver to transport the goods, but the driver never receives payment, also losing fuel costs and toll fees.

CLB pointed out earlier this year that the oversupply of trucks in the market under the pandemic, coupled with the pressure of vehicle loans, rising fuel costs and platform fees, has put many drivers under great pressure. For example, a driver was reported to have suffered a sudden cerebral haemorrhage in April, after long hours of driving at night to repay the loan he made to buy his vehicle. The driver is still in a coma, with medical bills of more than 10,000 yuan per day, and now his vehicle must be sold to pay for his care.