Following last month’s strikes and protests by food delivery workers in mainland China, drivers in Hong Kong staged a protest outside the company headquarters of Foodpanda on 15 July.

Following last month’s strikes and protests by food delivery workers in mainland China, drivers in Hong Kong staged a protest outside the company headquarters of Foodpanda on 15 July.

Drivers held up slogans that read, “Shameless Foodpanda” and “Repay my hard-earned money,” while seven worker representatives sought to negotiate with company management. 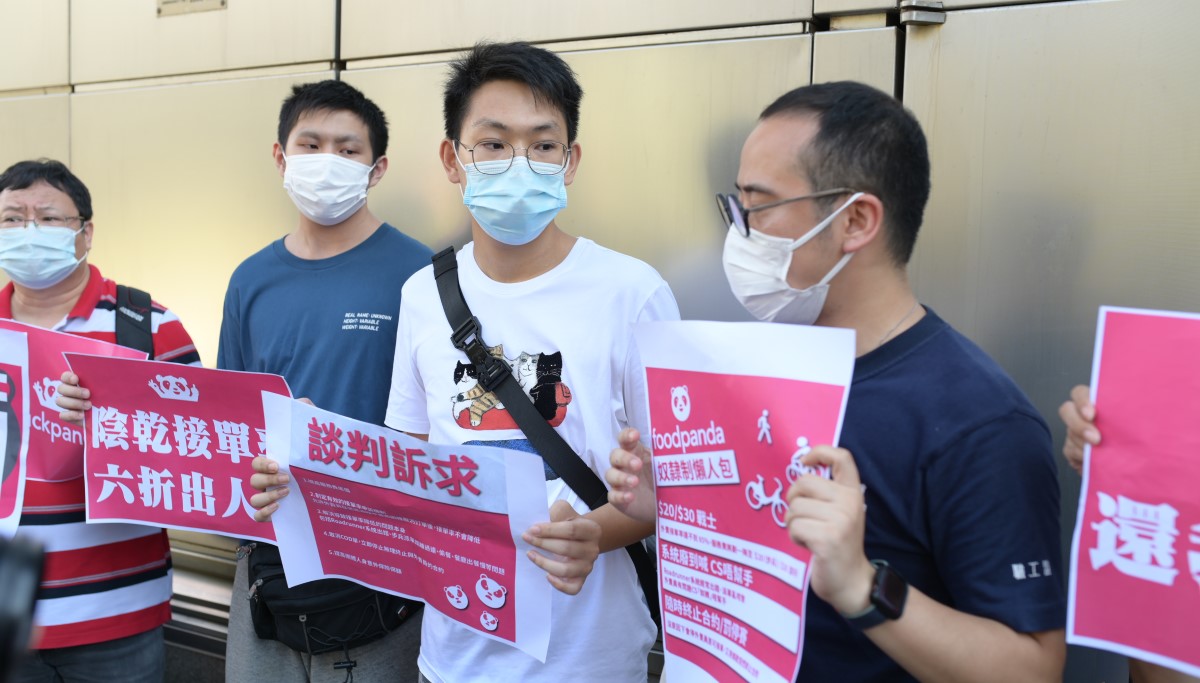 Drivers said they had resorted to collective action after stonewalling from company management on demands for fair pay and improvements in other working conditions.

Foodpanda is one of three dominant food delivery services in Hong Kong, alongside Deliveroo and UberEats. According to its drivers, Foodpanda has continually lowered rates for each order during the pandemic and accepted more riders, resulting in riders being assigned one order every few hours and earning far below Hong Kong’s statutory minimum wage of HK$37.50 per hour.

The drivers had five demands: raising the base rate for delivering orders, installing a complaint mechanism for order acceptance rates, a halt to unreasonable termination of staff contracts, ending the cash-on-delivery system, and increasing personal accident insurance coverage.

During four hours of negotiations, management refused to agree to any demands, or to hold another meeting.

Foodpanda has actively tried to deter organising among its workforce. Instead of listening to worker concerns, Foodpanda staff have reportedly infiltrated rider communication groups, and when drivers expressed their frustrations with the company, they were fired within two hours of making those comments.

Following a drivers’ strike in September 2020, Foodpanda agreed to some of the drivers’ demands for greater transparency. The company agreed to announce service fees one week in advance and improve customer service support. However, it reserved the right to change payment rates and retained a condition – added in July that year – that if acceptance of orders fell below 85 percent, it would cap rates at HK$20 for delivery on foot and HK$30 for motorcycle and bicycle deliveries.

One delivery driver who operated in the working-class area of Tin Shui Wai, in Hong Kong’s New Territories, had a long list of complaints.

He told CLB that he had used his own money to purchase his bike, helmet and uniform. Foodpanda’s route calculation algorithm did not take into account detours and inclines, he said. And order rejections are integrated into the calculation of the base price that drivers receive for each order.

Moreover, he said, around half of the orders he fulfilled each day were cash on delivery, which had to be handed over to management for counting. Staff often miscalculated, leaving him short changed.

He added that workers can be fired without cause, and when they try to appeal, they face a sluggish process with email communications, rarely receiving a timely or adequate response. Although the company does provide injury insurance, he said the details are not transparent.

Foodpanda claims that its employment practices are common throughout the industry. However, this only confirms the widespread abuse of worker rights in the food delivery industry, where pay conditions are changed arbitrarily and workers are forced to the brink.

Food delivery workers across the world, particularly in the Global South, face the same pressures and are taking collective action in response. In India, for example, drivers have effectively organised, but Hong Kong still lags behind, with only a loose coalition of activists who can organise limited protests.