Throughout much of the last decade, Shenzhen was one of the main centres of worker activism in China. Today, the picture is very different.

Throughout much of the last decade, Shenzhen was one of the main centres of worker activism in China. Today, the picture is very different.

In the early and the mid-2010s, worker protests were largely driven by factory closures, mergers or relocations, with workers demanding payment of wages in arrears, social insurance contributions, and severance pay. Large numbers of first-generation migrant workers who had been employed at the same factory for decades had no option but to take collective action to defend their rights when closures were announced.

As factories have moved away, the number of protests began to drop off sharply from 2015 onwards. In that year, China Labour Bulletin’s Strike Map recorded 75 incidents in the manufacturing sector, accounting for 75 percent of all worker protests in the city. Just two years later, in 2017, the number had fallen to 22, or 50 percent of all protests.

This trend was exacerbated further by China’s economic downturn, the Sino-US trade war, and the Covid-19 pandemic. So far this year, the CLB Strike Map has logged only four collective protests in Shenzhen’s manufacturing sector, or 24 percent of total worker protests (see table below).  Although the overall number of protests in Shenzhen has steadily declined since 2015, the steepest decline by far has been in the manufacturing sector. 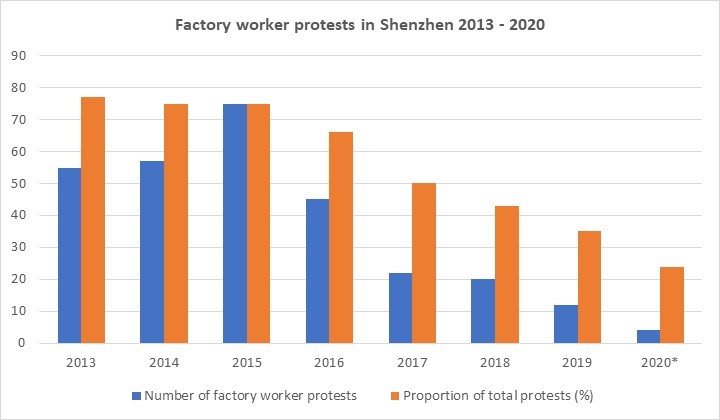 A recent (now deleted) blog entitled, Shenzhen increasingly depressed as factories close or relocate (深圳日益萧条 工厂外移, 倒闭潮袭来), described how the industrial parks in the suburbs of Bao’an and Longgang have become ghost towns, with hardly anyone recruiting or looking for jobs. Some of the remaining factories have clung on, hoping for a recovery at the end of the year, but are now actively considering a move to lower-cost countries such as Vietnam and Cambodia.

In contrast with the mid-2010s, when it was clear that many factory bosses were trying to cheat their employees out of their legal entitlements when they moved away, today’s laid off workers are largely resigned to the fact that their employer, like everyone else, is experiencing genuine financial difficulties.

In addition, many of the larger, more financially viable factories that remain in Shenzhen tend to offer better pay and working conditions than a decade ago. As such, labour disputes are less likely to erupt in the first place.

The last major factory worker protest in Shenzhen was in the summer of 2018, when prolonged demonstrations by workers and their supporters at the Jasic Technology factory made international headlines.

The Jasic protests, however, led to massive crackdown on civil society organizations and labour activists in the city who had played a crucial role throughout the 2010s in advising workers on their rights and coaching them on the best ways to frame their demands and engage in collective bargaining with their employer.

In January 2019, five well-known activists were detained by police in Shenzhen and held for more than 15 months before being released in early May 2020. They all received suspended prison terms and have been unable to resume their work.

There has been a decline in the proportion of factory worker strikes in China as a whole, as the service sector gains more prominence. But in Shenzhen, where the municipal government has a long-standing policy to transition away from low-end manufacturing to a commercial and service-based economy, the trend has been far more dramatic. 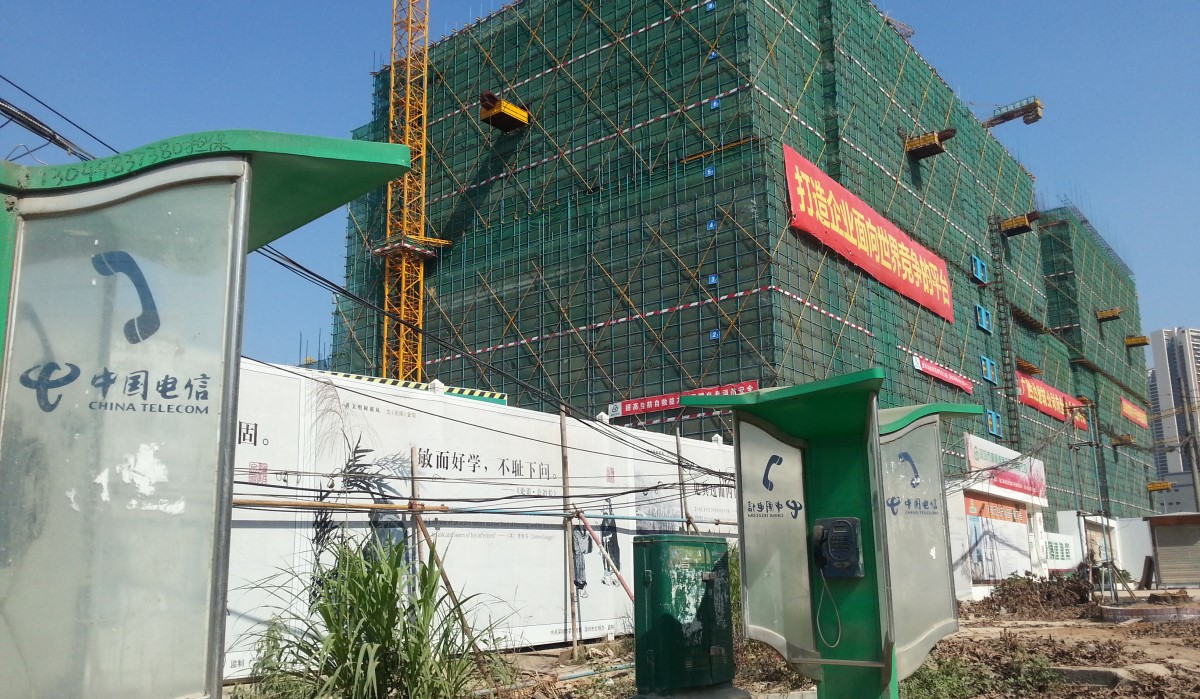 Redevelopment underway in the Bantian district of Shenzhen in 2013

Whole districts that used to be industrial and manufacturing complexes have been transformed into residential and commercial centres as the city’s subway system extends ever deeper into the suburbs. The workforce has largely moved from blue-collar to white-collar jobs. However, there are still occasional protests by construction workers and those in the transport and service sectors.

The future of labour activism in Shenzhen is unclear, but two trends are likely to emerge: workers in the app-based transport sector will continue to take collective action against arbitrary adjustments in pay and conditions, and workers in the tech sector will continue to protest excessive working hours, characterised by the infamous 996 system, and demand a better work/life balance.