Trade unionists in Hong Kong have vowed to push for work-related injury compensation for the 73 workers infected with Covid-19 during a mass outbreak at the Kwai Chung Container Terminal during July and August.

Trade unionists in Hong Kong have vowed to push for work-related injury compensation for the 73 workers infected with Covid-19 during a mass outbreak at the Kwai Chung Container Terminal during July and August.

In an interview with China Labour Bulletin, Wong said the outbreak was directly related to the appalling working conditions at the container terminal and the insistence of employers that operations continue uninterrupted, 24 hours per day, even at the height of the pandemic.

In addition to compensation, Wong said, the union would also fight for back pay for furloughed workers, the abolition of the 24-hour continuous working system and improved worker dormitories.

Most of the infected workers were employed by the contractor Hong Ki, under the Modern Terminals Company. The staff room at the centre of this outbreak was cramped and unhygienic with bunk beds closely adjacent to each other, increasing the risk of infection, especially when workers took turns to use the same bed under the so-called “hot-bed” system.

Wong said the union had warned of the dangers of infection at the outset of the pandemic in February. “Staff rooms at the dock are worse than prison cells in Hong Kong. We asked the contractor to protect workers’ health back in February. But the company did nothing concrete.”

Wong described the specific delayed and inadequate responses of the the company and health authorities:

“When a driver working in the dock was diagnosed with Covid-19 on 23 July, the company did nothing to curb the spread of the virus. The Centre for Health Protection was also slow to act. They only realised the possibility of an outbreak on 8 August. Seventeen cases were recorded on 13 August, but it was only on 16 August, three days later, that the company finally agreed to stop work and moved the workers into quarantine facilities. We have to say the negligence and the irresponsibility of the company directly contributed to this disaster.”

The contractors did improve conditions in the staff rooms following the outbreak, but as Wong pointed out, they had the ability to provide decent conditions earlier but chose not to.

All the improvements so far in pay and working conditions in Hong Kong’s container ports have come through worker struggle. 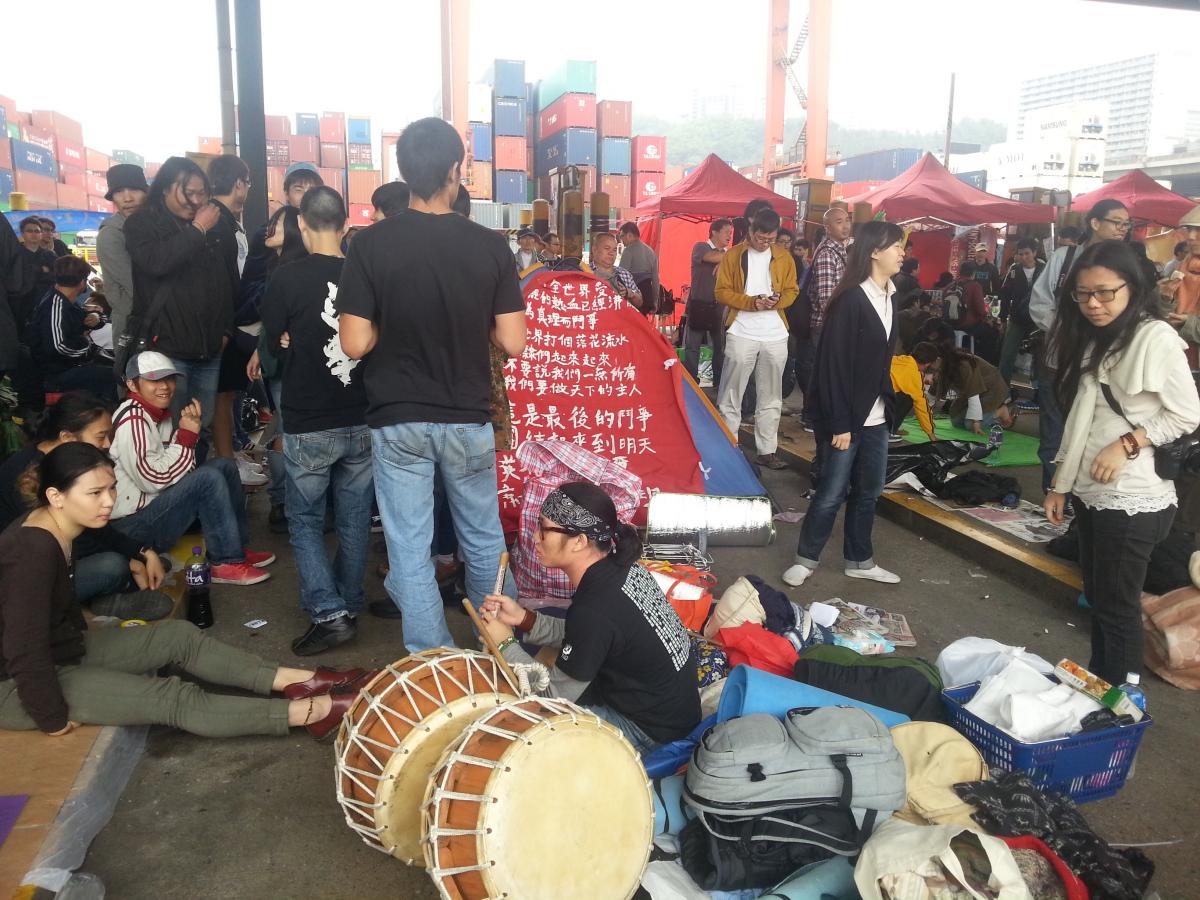 In the Spring of 2013, dock workers staged a 40-day strike over pay and conditions (see above photo), which led to some marginal improvements. At that time, the staff rooms at the container terminals were already a major area of concern. According to the Hong Kong Dockers Union, prior to the strike, “workers were sleeping on the ground with rats and bugs.” The strike led to the introduction of bunk beds and showers. However, the Covid-19 pandemic cruelly exposed the hazards that remained unaddressed.

Hong Kong dock workers had not had a pay raise in the 17 years leading up to the strike, and the work pressure was intense. Workers regularly had to do three eight-hour shifts in a row, and crane operators could not even leave their cabs to go to the toilet.

The strike led to a 9.8 percent wage increase in 2013, and a 6.0 percent increase with a 4.1 percent bonus the following year. However, unionists point out that this overall rise in pay did not even cover increases in the cost of living since 1997, especially the cost of housing, which has increased by about 200 percent over the last 25 years. Crane operators are now allowed to eat their meals and go to the toilet outside their cabs, but this is hardly a concession the employers should be proud of.

The HKCTU will continue to push for improved pay and working conditions at Hong Kong’s container ports.

CLB attempted to contact the Container Transportation Employees General Union under the Beijing-affiliated Hong Kong Federation of Trade Unions, but received no response.