Tens of millions of people have been affected by this year’s devastating floods across central China, mostly in the relatively poorer provinces of Jiangxi and Anhui, as well as around Wuhan, the locus of the Covid-19 outbreak earlier in the year.

Tens of millions of people have been affected by this year’s devastating floods across central China, mostly in the relatively poorer provinces of Jiangxi and Anhui, as well as around Wuhan, the locus of the Covid-19 outbreak earlier in the year.

As with the Covid-19 pandemic, it has been China’s low-paid workers, particularly rural migrant workers, who have been disproportionately affected by the floods. The focus of the government’s flood relief efforts so far has been on major cities, often leaving smaller cities and rural areas to fend for themselves. In the famous porcelain production town of Jingdezhen, for example, hundreds of workshops, factories and shops were inundated by flood waters that reached two metres high at their peak.

One factory owner told the South China Morning Post that her business would probably have to be closed for a whole month during the clean-up operation. Shop owners who had been forced to close for around three months during the pandemic and were desperate for new customers to boost revenue saw their stock wiped out in the flood.

Many migrant workers rushed back to their home towns to help with the rescue operations because of the lack of government assistance there. All too often, the homes built by migrant workers, after decades of saving their meagre earnings, were badly damaged or destroyed in the floods, with no guarantee of an insurance pay-out.

Meanwhile, the low-paid workers who were on the frontlines of the fight against the Covid-19 pandemic have once again been called into action. In Leping, adjacent to Jingdezhen, 2,000 sanitation workers were deployed to clean up debris after the floods and prevent stagnant water from becoming a breeding ground for disease. In was a similar story in She county, Anhui, where 1,600 sanitation workers worked overtime to clear garbage and the river silt that had been dumped in the city streets. And again echoing the pandemic, it has mainly been women workers on the frontlines of flood prevention and relief. 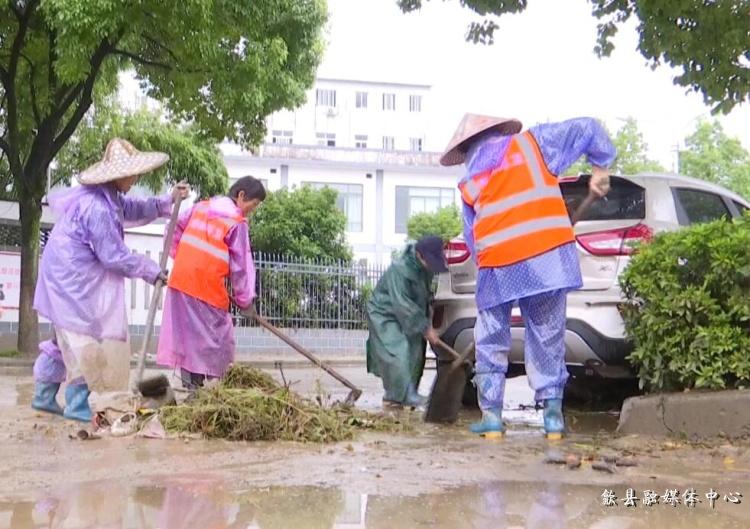 Clean up work in She county. Photo from She County Convergence Media Centre.

Local government and trade union officials too have been diverted from their usual tasks to focus on flood relief work. In Hangzhou, the municipal trade union has established a scheme to compensate workers who lost property or were injured during the floods, offering up to 20,000 yuan. But Hangzhou is very much the exception. Very few workers have actually benefited from government or trade union relief measures, and the pressure on household finances for ordinary workers is already taking a toll.

Official government data for the first half of the year released by the National Bureau of Statistics on 16 July show that on average, per capita income fell by 1.3 percent in real terms while per capita expenditure dropped by 9.3 percent. The figures were even higher in China’s urban areas, with declines of 2.0 percent and 11.2 percent respectively.

The official figures confirm a lot of anecdotal evidence showing that even for middle-class white-collar workers, incomes have been cut, payment of salaries has been delayed and staff have been laid off or placed on unpaid leave. For low-paid migrant workers, the impact has been even more severe.

A recently published survey suggests that at least 30–50 million migrant workers lost their jobs in late March, and that it was likely that by mid-May, at least 20 million were still unable to resume work. Those who could find work generally earned lower wages and endured far more precarious working conditions. The survey also pointed out that only a very small minority of unemployed migrant workers had received unemployment benefits or income support.

The resilience of China’s workers in the face of adversity is remarkable, as China Labour Bulletin’s Strike Map indicates that protests are on the rise again as layoffs and wage arrears accumulate and patience runs out.