Several Chinese cities including Zhengzhou, Guangzhou, Shenzhen have announced plans to build new hospitals in a bid to halt the spread of the coronavirus that originated in Wuhan.

Several Chinese cities including Zhengzhou, Guangzhou, Shenzhen have announced plans to build new hospitals in a bid to halt the spread of the coronavirus that originated in Wuhan. Beijing has already started to renovate the Xiaotangshan hospital used in the SARS crisis in 2003.

Just like the two new hospitals in Wuhan, the authorities hope to have these new facilities in place and operational in just over a week.

The speed with which the Huoshenshan (Fire God Mountain) Hospital on the outskirts of Wuhan was completed has earned praise from commentators both inside China and abroad. However, these ultra-high-speed projects have placed a massive strain on construction workers, both in terms of workload and health and safety.

At Huoshenshan, a crew of 7,000 worked around the clock to get the facility up and running by 4 February. Initially, there was not even a shift system in place and everyone worked constantly. One worker said he had been working for ten hours straight with just a short break for lunch since he arrived at the site at 8. am. Eventually, as more workers arrived, construction was organised in two shifts, with construction workers doing 12-hour shifts every day and administrative staff working even longer. 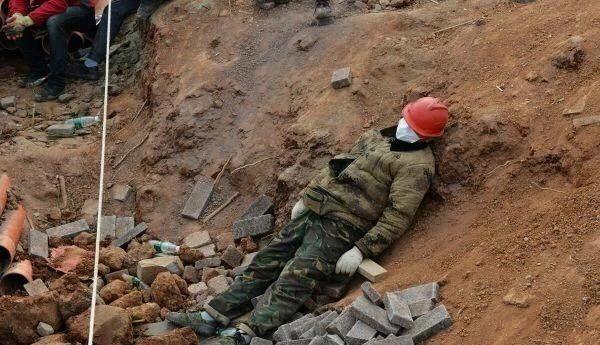 An exhausted worker takes a break at the Huoshenshan construction site. Photo from the Changjiang Daily.

Many of the construction workers at Huoshenshan were rural migrants who were planning to return home for the Lunar New Year holiday but were trapped in Wuhan when the authorities closed off the city on 23 January. Working on the new hospital gave them the chance to earn more money but also contribute to the fight against the coronavirus in Wuhan, they said.

One labour contractor from Henan told Caixin that he could earn double his usual pay by working through the holiday. However, China’s Labour Law stipulates that labourers working on public holidays should be paid no less than 300 percent of their usual wage.

In addition to excessive working hours and underpayment, workers are also at greater risk of accidents and infection. On the eve of the hospital’s opening day, a dozen workers, equipped only with thin masks that offered little protection, could be seen fixing a leaking drainage pipe.

One 56-year-old construction worker who worked at Huoshenshan has already been confirmed as infected with the coronavirus, as have his parents. However, none of them has been able to find a place at any of Wuhan’s overcrowded hospitals. It is likely that more cases have gone unreported.

It is essential, as more cities plan high-speed construction projects that all construction workers are properly compensated and thoroughly protected from the risk of infection.

Moreover, the authorities must ensure that there are no cases of wage arrears arising from rushed hospital construction projects. Wage arrears are endemic in China’s construction industry and few government measures introduced so far have adequately addressed the problem.