Workplace safety is a major issue in China’s hospitals but the vast majority of collective protests by medical staff are triggered by wage arrears, the failure of employers to pay social insurance contributions and bonuses, or arbitrary changes in employment status.

The fatal stabbing of a Beijing hospital doctor on Christmas Eve has once again highlighted the long-standing problem of hospital violence in China.

Workplace safety is a major issue for hospital staff in China, and medical professionals have staged several collective protests in the past demanding that hospital administrators and the government do more to protect doctors from violence. Most notably, in October 2013, several hundred workers at Wenling No 1 People’s Hospital in Zhejiang staged an angry protest after a patient stabbed three doctors, killing one of them. See photograph below. 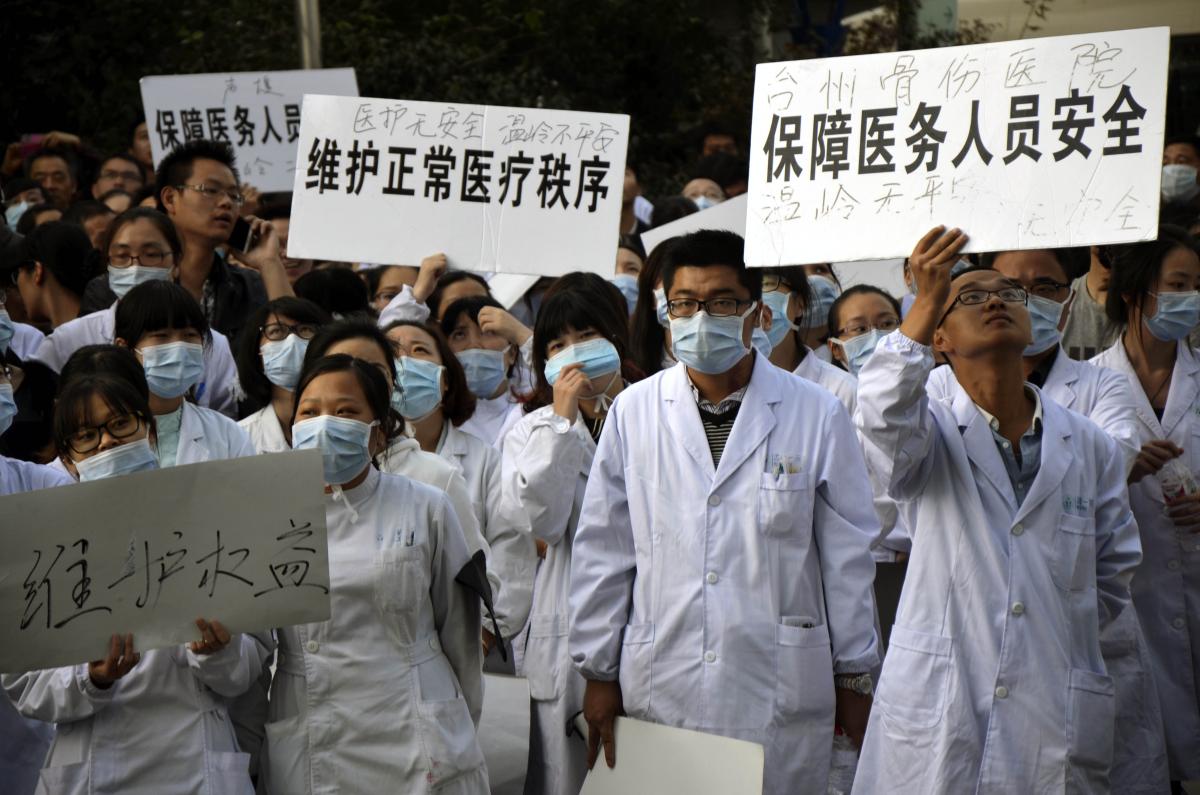 However, an analysis of hospital worker protests over the last seven years shows that workplace violence is far from the most pressing issue affecting medical staff. Of the 117 collective protests by medical professionals recorded on China Labour Bulletin’s Strike Map since January 2013, only six have been directly related to attacks on staff.

The vast majority of collective protests by hospital staff have been triggered by wage arrears, the failure of employers to pay social insurance contributions and bonuses, or arbitrary changes in employment status.

Of the 21 cases recorded so far this year, 16 were related to wage arrears at hospitals and medical centres, predominantly in smaller provincial cities and remoter regions of China where local governments do not have sufficient resources to invest in healthcare. The most recent wage arrears protests, for example, were in Harbin on 19 December and in Lanzhou on 18 December following the closure of a hospital in that far-western city.

Earlier in the year there were protests in Guiyang on 22 February, where staff were owed at least two month’s salary and social insurance payments totalling more than one million yuan, and at a plastic surgery clinic in Shenyang on 27 May where staff were owed several months’ salary and social insurance payments but were told by management that they would only get paid after they resigned.

In other collective actions, about two hundred rural doctors in three separate counties across China reportedly resigned in July during protests over low pay, excessive workloads and the repeated failure of local governments to pay the healthcare subsidies owed to them.

The central government in Beijing has long recognised the inequities in the healthcare system, which concentrates all the best resources and specialist clinics in major cities, leaving small cities and especially rural areas underfunded and under-resourced. However, the government has continually failed to tackle the problem.

A new law, approved by the National People’s Congress on 28 December aims to address the issue by “prioritising the development of community healthcare and channelling more resources into grassroots facilities.” However, the Law on Promoting Basic Healthcare (基本医疗卫生与健康促进法), which goes into effect on 1 June 2020, is vague on exactly how these new resources will be funded and utilised.