The tragic death of an elderly sanitation worker in Guangzhou highlights once again the urgent work China’s trade unions need to do in organizing, improving pay and working conditions, and countering exploitative management practices.

Yu Youde, a 57-year-old migrant worker from Hunan, had been employed as a sanitation worker in Guangzhou for about five years when, on 25 October, the day before China’s National Sanitation Workers Day, he was suddenly sacked.

Yu was summoned to the Changxing sub-district sanitation centre in northern Guangzhou and forced to sign a termination agreement on the grounds that he had consistently violated work discipline and exceeded the annual demerit point threshold of 20 points. Two days later he was found dead in his small rented room still wearing his work uniform.

After the body was discovered, the sanitation company reportedly told its employees that Yu was no longer employed at the station and that they should remove the corpse as soon as possible. Moreover, workers should not discuss the case or circulate information about it on social media. When some workers did publish news of the death, they were reportedly fined 250 yuan for breach of company regulations. Some social media reports on the incident have now been deleted.

Police are investigating the case and there is no definitive link yet between Yu’s dismissal and his sudden death. Nevertheless, the case has highlighted once again the harsh and exploitative working conditions that China’s sanitation workers have to endure.

Workers at the Changxing sanitation centre explained that it was common practice for employees to be fined for the slightest infraction of the staff code such as reporting late for work or taking an unauthorised rest. Deductions of 50 yuan for each point significantly reduced their monthly salary of around 3,000 yuan, they said. The statutory minimum wage in Guangzhou is currently just 2,100 yuan per month.

The system used in Changxing, whereby 20 demerit points leads to automatic dismissal, is widely replicated throughout China by companies contracted by local governments to clean city streets and dispose of refuse. However, the system’s legality has been questioned on the grounds that accumulated minor infractions do not constitute the “serious dereliction of duty… causing substantial damage to the Employer,” needed for dismissal, according to Article 39 (3) of the Labour Contract Law. Employees may be dismissed if they “materially breach the Employer’s rules and regulations” but these rules should first be negotiated with the trade union or workers’ representatives rather than being arbitrability imposed by management. Moreover, many elderly sanitation workers like Yu are barely literate and cannot understand the company’s detailed written regulations in any case.

There is clearly a lot of work for China’s trade unions to do in terms of organizing sanitation workers, improving their pay and working conditions, and countering the exploitative management practices that are so pervasive in the industry.

So far however, the official trade union has done very little except offer platitudes. On National Sanitation Workers Day this year, for example, the All-China Federation of Trade Unions (ACFTU) issued a short statement of “gratitude and sympathy” for China’s sanitation workers (致全国环卫工人的慰问信) that praised Communist Party General Secretary Xi Jinping just as much as the sanitation workers it was addressed to.

All too often, it is the Chinese media rather than the union that plays the most effective role in protecting sanitation workers. When it was reported earlier this year that the Nanjing West River Environmental Services company was forcing some of its workers to wear smart bracelets that emitted an alarm telling workers to “add oil” if they stayed still for more than 20 minutes, there was a public outcry on social media. After initially defending the use of the devices on the grounds of “greatly improved efficiency,” the company soon bowed to public pressure and discontinued their use.

However, the “add oil” scandal was just one example of the way privately-run sanitation companies squeeze their employees in the name of increased efficiency and reduced costs. Companies taking over a contract will often assign one worker to an area previously covered by two workers and then impose fines on that worker if they cannot complete the cleaning work in the time allotted. Workers are sometimes fined if they miss just one cigarette butt on the street.

Sanitation workers are often denied proper employment contracts and social insurance benefits, as well as compensation when their employment is terminated. Many workers are denied these benefits because they are over the official retirement age (50-years-old for women, 60-years-old for men) and as such not considered employees. Instead they are classified as service providers, not protected by labour law.

Basic wages for sanitation workers have always been very low and it has been a constant struggle for workers to get a pay raise that can just about keep up with the increased cost of living in their city. Some of the most successful campaigns for better pay and conditions in the past have been in Guangzhou where workers had support from student groups and local civil society organizations. 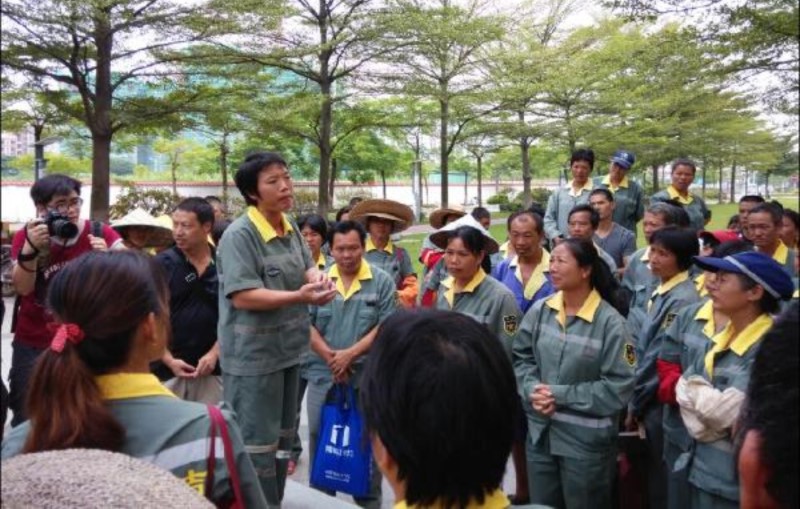 In 2014, for example, a two week strike (above photo) by sanitation workers in Guangzhou’s University Town district over severance pay eventually forced the management company to negotiate and agree to pay the workers 3,000 yuan each for every year of service at the company, plus their social security and housing fund contributions in arrears. The total payment for the more than 200 workers was an estimated three million yuan. Moreover, when the new company taking over the University Town contract initially refused to hire the strike leaders because it considered them to be “trouble makers,” the workers maintained their solidarity and insisted that all those previously employed in the area be hired again.

The ACFTU could learn a lot from organizing ability and solidarity shown by the Guangzhou sanitation workers and the civil society labour organization that played a key role in training and advising them on collective bargaining, electing worker representatives and negotiating strategies.

The government forced that civil society organization to close down just one year after the University Town victory so the ACFTU is now basically on its own. The union does have one advantage however in that because sanitation workers are predominately employed by private companies, the union is perfectly placed to set up enterprise unions in those companies.

This would of course require local trade union officials to break with their longstanding tradition of inactivity. Rather than just sit in their comfortable offices and wait for the workers to come to them, officials would need to go out on to the streets and talk to sanitations workers about their work, the problems they have, and what the union can do to solve them.