China’s urban unemployment rate increased by 0.2 percentage points last month to stand at 5.3 percent at the end of July.

China’s urban unemployment rate increased by 0.2 percentage points last month to stand at 5.3 percent at the end of July, according to a National Bureau of Statistics (NBS) bulletin issued today.

This equalled the highest unemployment rate of year so far, previously recorded in February, a month when many workers look for new employment. See table below.

A spokesperson for the NBS attributed the most recent jump in unemployment primarily to the large number of college graduates entering the job market over the summer. The total number of graduates this year was a record 8.3 million. 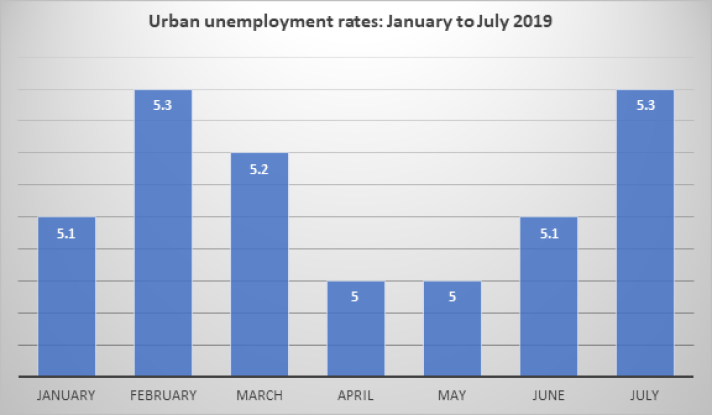 The NBS spokesperson pointed out that the unemployment rate for 25-59-year-olds remained constant at 4.6 percent, which she said indicated that the overall employment market was still relatively stable. It also suggests that the rate of youth unemployment is much higher than 5.3 percent but no exact figures were released by the NBS.

The NBS figures are based on monthly surveys of urban workers, including rural migrant workers, and are supposed to be in line with International Labour Organization survey standards. However, rural unemployment is not included and importantly neither are people in short-term or precarious employment who make up an increasingly large proportion of the urban working population.

Most low-paid workers who are laid off (often with no compensation and owed wages in arrears) have to find another job as quickly as possible because they have few savings and bills to pay. However, many of the jobs that are available to laid off workers, particularly in the urban service sector, will be just as low-paid and insecure as their previous employment.

Laid off workers will still stage collective protests in a bid to defend their rights and protect their livelihood but these protests tend to be short-lived. The main purpose is to bring public attention to their grievances in the hope that the local government or even the trade union will intervene on their behalf.

It is increasing rare to see the large, longer-term strikes and protests that were a feature of the mid-2010s.