In this case study from CLB’s trade union reform and accountability program, we meet one of the few trade union officials in the construction industry who is willing to get his hands dirty and help workers resolve the issues most important to them.

In this case study from China Labour Bulletin’s ongoing trade union reform and accountability program (工会改革观察与促进), we meet one of the few trade union officials in the construction industry who is willing to get his hands dirty and actually help workers resolve the issues most important to them. 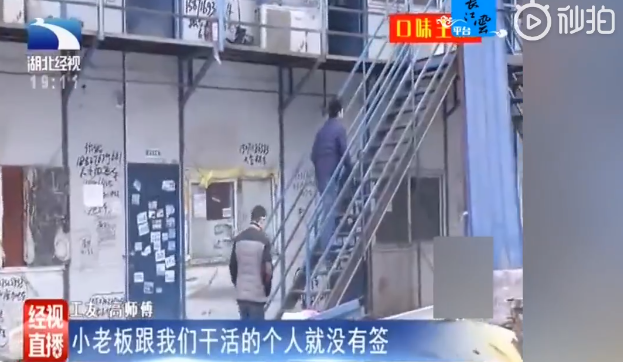 The Incident: On 11 December 2018, a group of 24 construction workers in the central city of Wuhan staged a protest demanding the payment of wages in arrears amounting to 490,000 yuan. They had been hired by a labour contractor, Xiao Chen, who had in turn signed a contract with a labour agency to provide plumbing and electrical workers for a construction project in the city. None of the workers hired had signed an individual employment contract with either Xiao Chen or the labour agency. The workers ended up doing more work than stipulated in the original service contract and demanded additional payment. However, Xiao Chen argued that he could not pay the workers because he had not been paid himself. He then disappeared until the story came to light in the local media. Xiao Chen and the workers went to the construction project office where local labour inspectors mediated between Xiao Chen and the labour agency. Eventually the construction company agreed to pay the 24 workers all the money they were owed.

The response: In January this year, China Labour Bulletin contacted the local Hongshan District Trade Union and the local construction sector trade union to follow up on this case. None of the local trade union officials had heard of this wage arrears case despite the fact that it had been widely reported by the media and subsequently resolved by the local labour inspectorate. None of the workers involved had approached the union and the labour department had not notified the union of the case. An officer from the district union explained:

However, none of the 24 workers in the Hongshan wage arrears case had signed any kind of employment contract, suggesting that the Workers Daily report may have been exaggerated or that the collective contract and wage negotiation system only existed on paper.

When we interviewed the soon-to-retire chairman of the Hongshan District Construction Sector Trade Union, Lu Dejun, who was one of those complimented by the Workers Daily report, he had no hesitation in discussing the problems with Wuhan’ so-called collective wage negotiation system.

First, he said, the union did not really have the authority or the power to bring big construction companies to the negotiating table, it was only the government’s construction bureau that could force the enterprises to talk.

There is a government department in charge of the whole industry, it is quite powerful and it can pressure the construction enterprises… if it were not for their help, we would not be able to negotiate, the employers would just ignore us.

Asked if the collective power of trade union members and ordinary workers would be sufficient to bring employers to the negotiating table, Chairman Lu said:

Hardly. To be honest, in China we have our own special characteristics. Despite the national union and the central government demanding that we eliminate bureaucratic tendencies, we have to face these characteristics, that we cannot do our job well without relying on our bureaucratic resources. It is just the reality.

But even with government support, the trade union still struggles to get anything done. Chairman Lu remembered that once when he tried to bargain for a wage increase for workers, he wanted to convince the construction companies with hard evidence, so he went to the district’s construction sites and personally investigated the workers’ pay and conditions. Incidentally, he is one of the few trade union officials that we are aware of who has undertaken this kind of empirical study and acted on it.

His efforts resulted in construction workers getting an average 200 yuan increase in the minimum wage, with an additional increase of at least ten percent every Lunar New Year. However, Chairman Lu downplayed his own achievements. “The minimum wage is not the main problem in the construction industry,” he said. It was not the workers’ primary concern:

In the construction industry, the negotiated minimum wage is well below the actual wage. Because the ordinary wage has been raised, workers earned more than the statutory minimum. Construction workers can earn at least around 300 yuan per day (while the monthly minimum wage is about 2,000 yuan). This industry is not an easy place to work. Construction workers have to endure long hours in all kinds of weather and a lot of different work hazards.

Chairman Lu tried to raise this issue with his superiors but they insisted that collective negotiations in the construction industry should only focus on the minimum wage. After listening to the workers however, Chairman Lu was able to identify their three main concerns as, “wage arrears, work safety, and getting ill without medical insurance.” These are of course the areas the trade union should be concerned about.

Chairman Lu agreed with many of our suggestions for developing a genuine sectoral trade union but he also stressed that, “to turn these good thoughts into reality, we have to rely on the higher leaders.”

We were delighted to encounter such a thoughtful trade union official during our investigations but we are concerned that he is not being listened to, let alone having his ideas implemented. We hope that the Hubei provincial trade union can employ Chairman Lu as a consultant after his retirement and that the Wuhan municipal union can negotiate an additional collective agreement with the city’s construction sector enterprise association based on the three main concerns of construction workers in the city as identified by Chairman Lu.

For more details, please refer to the original Chinese language analysis of this case and the overall report on five cases in Hubei from the same month.