China’s coal mine safety record has come under fire from the official media after 30 miners died and 21 were injured in June, China’s National Work Safety Month.

China’s coal mine safety record has come under fire from the official media after 30 miners died and 21 were injured in June, China’s National Work Safety Month. The Coal Mine Safety website listed details of the 12 accidents that had occurred in June and urged the industry to refocus its efforts on accident prevention.

Coal Mine Safety published another report on 9 July putting the overall death toll for the first half of the year at 117, compared with 333 coal mine deaths in the whole of 2018. That report showed that, after four months of relatively few incidents, there was a notable surge in accidents and deaths in June, including two major accidents. At least 11 miners suffered serious injuries from carbon monoxide poisoning during a fire at a mine in Jincheng, Shanxi, on 3 June, and less than a week later on 9 June, there was another accident at a coal mine near Changchun following an earth tremor that led to nine deaths and ten injuries. 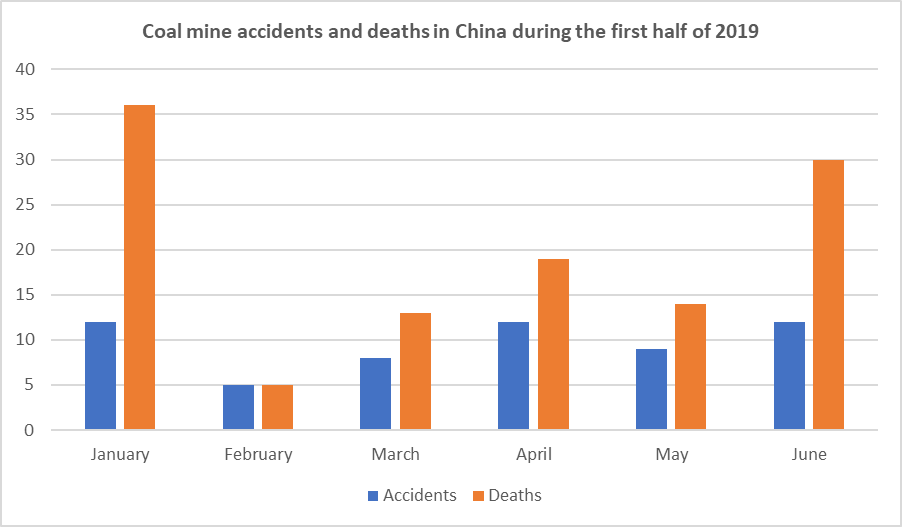 In the five months prior to Work Safety Month, the provincial government in Shanxi, China’s coal heartland, had ordered 82 mines to suspend production after uncovering potential safety hazards. However, three of the 12 accidents recorded in June still occurred in the province, casting doubt on the effectiveness of the government’s inspection and enforcement program.

China’s coal mine safety record has improved substantially over the last 15 years, and last year, for the first time, it recorded fewer than 0.1 deaths per million tons of coal produced. However, as the recent spate of accidents shows, the industry still has a long way to go, not only in terms of accident prevention but in dealing with legacy issues such as the hundreds of thousands of former miners suffering from pneumoconiosis, black lung disease.

In other industries, National Work Safety Month seemed to have little impact. China Labour Bulletin’s Work Accident Map recorded 45 incidents during the month in which at least 46 workers were killed and another 84 injured. There were slightly fewer accidents than usual in the notoriously dangerous construction industry but the sector still accounted for more than a quarter of all the accidents recorded. One of the most serious incidents occurred on 9 June when a mass scaffolding collapse in Bijie, Guizhou, left nine workers trapped and injured. See photo below. 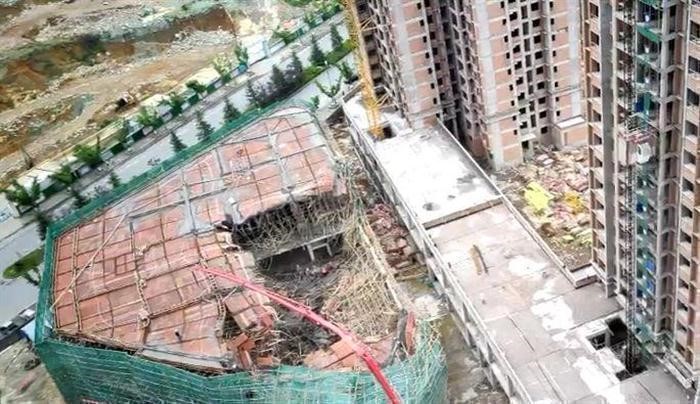 Accidents involving motor vehicles accounted for 27 percent of the total, with food delivery and sanitation workers being the most common victims. Many of the accidents involving food delivery drivers can be attributed to the high-pressure working conditions they are forced to endure. Drivers often have no choice but to ignore traffic regulations in order to make their deliveries on time.

Following the massive explosion at the Tianjiayi Chemical Co. pesticide plant near Yancheng in Jiangsu on 21 March, the government demanded much stricter enforcement of safety measures in the chemical industry. However, accidents still occurred on a regular basis. On 28 June, for example, several workers were injured in an explosion and poisoned by a gas leak at a chemical factory in Bengbu, Anhui. It was later revealed that the accident had been caused by illegal construction work undertaken by the company.