The courts in Guangzhou handle up to 4,000 cases involving women workers’ rights each year. They are now urging trade unions etc. to help improve rights protection on the ground.

Gender discrimination in hiring, dismissal during pregnancy or after childbirth, and sexual harassment in the workplace have become increasingly serious issues since the relaxation of family planning restrictions in 2015, a Guangzhou court revealled Tuesday.

According to a detailed report issued on 17 June by the Guangzhou Intermediate People’s Court, from 2015 to 2018, the lower courts in Guangzhou handled up to 4,000 cases involving women workers’ rights violations each year, with up to 2,000 cases each year going to the appeals courts. 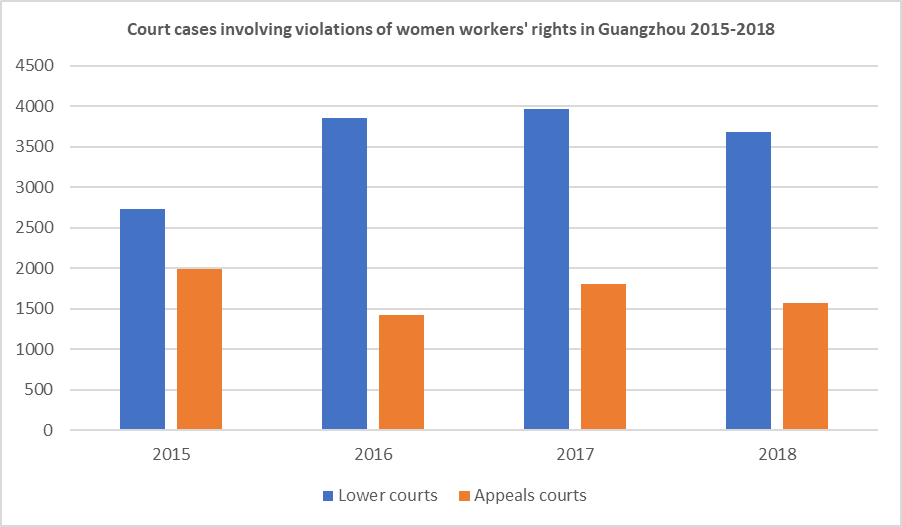 Firstly, women workers suffer from blatant discrimination during the hiring process. Women are deliberately excluded from many jobs in recruitment advertisements and not given due consideration for certain positions if they do apply.

Secondly, women workers are often subject to dismissal or pay cuts during pregnancy, childbirth and while breastfeeding. Employers frequently do not provide legally-mandated maternity benefits or grant maternity leave. Other employers attempt to limit women employees’ rights to marry or get pregnant.

The court noted that sexual harassment in the workplace is widespread but that victims have difficulty bringing such cases to court because usually the only witnesses are the victim and the perpetrator. Victims often cannot provide sufficient evidence to secure a conviction and as such they are sometimes reluctant to pursue a long and potentially costly court case.

Finally, the court highlighted the widespread covert discrimination that occurs in the workplace when traditional attitudes regarding the role of women in society are given free rein. Women are paid less and have fewer opportunities for career advancement, especially when returning to work after looking after children.

These issues are of course not just confined to Guangzhou but are widely replicated across the whole of China. A survey of professional employees in China by an online recruitment platform published in March this year, for example, showed that women earned on average 6,497 yuan per month in 2018, just 78 percent of the average wage for men. While in engineering and manufacturing industries, men occupied an incredible 95 percent of senior management positions.

The court also stressed the role of local women’s federations, trade unions and industry federations in resolving disputes on the ground before they escalate into litigation. Local trade unions usually have women’s committees and it is vital that these committees be given the authority and the resources they need to play a much more active and effective role than the limited one they currently perform.

Finally, the court announced a major publicity campaign to educate both employers and women workers about their rights. As part of the campaign, the court is publishing detailed studies of typical cases that highlight the most common problems in the workplace and the role of the courts in protecting women workers’ rights.

One of those cases highlighted occurred in 2016 and involved a 27-year-old chef who was denied an apprenticeship at Guangzhou catering company. It was the first successful gender discrimination lawsuit in which the court ordered the company concerned to make a public apology for its actions.