In the second English-language case study from CLB’s trade union reform and accountability program, we look at how trade union officials in Liyang, southern Jiangsu, responded to a dispute at a local factory where workers were owed six month’s wages.

In the second English-language case study from China Labour Bulletin’s ongoing trade union reform and accountability program, we look at how trade union officials in the small city of Liyang in southern Jiangsu responded to news of a dispute at a local factory where the workers were owed six month’s wages. The incident was widely reported on social media and recorded on CLB’s Strike Map in September last year.

The incident.  On September 15, 2018, several workers at an automotive-components manufacturer in Liyang staged a rooftop protest. The workers claimed their wages and social insurance contributions had not been paid since March. Police and government officials arrived at the scene and after hours of negotiation, the workers agreed to abandon the protest and leave the rooftop. The government officials promised to help resolve the dispute but the results are unclear. See photo below. 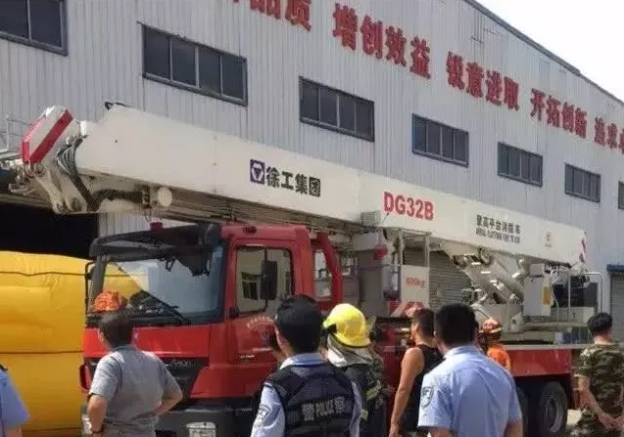 The response.  Staff at the Liyang Municipal Federation of Trade Unions responded positively to our inquiries about the incident and were happy to refer us to other colleagues who could help. Staff in the union’s legal department were aware of the incident from online posts but were not sure how or if it had been resolved because the district trade union had not reported on the case. The municipal union officials assumed that the case had been resolved but told us they would follow up to make sure.

The general attitude of the Liyang union officials was very positive, and most believed that the union should stand up for the interest of the workers, and that the trade union reform initiative was supposed to help facilitate that objective. One of the interviewees said he enjoyed his work and often did overtime to make sure the union’s goals were accomplished. He was committed to union work and stated that the union should be the sole representative of the workers:

The union represents the interests of workers. People involved in a mass incident like this will not necessarily trust the local government because government officials may deliberately delay or deflect the problem. The workers will then ask for the union’s help but they cannot trust the enterprise union either, so in the end it is the local union federation that is the only one actually representing workers… The identity and role of the trade union cannot be denied.

However, the officials noted that there was a limit to what they can do:

If the workers approached the municipal union directly, we would go down there. However, all we can do at the moment is assist and support them in principle. It is hard for us… After all, the trade union does not have any real administrative power… We can hardly take the case and promise the workers that we will solve it. That would be unrealistic. We have to rely on our relationship with local government departments to get things done.

For example, he said, if union officials discovered that a local enterprise was not in compliance with the law, they would contact the local human resource and social security bureau and ask officials there to use their administrative authority to enforce the law.

Although limited in their ability to act, the Liyang union officials still sought to push through the obstacles in their way and gradually and incrementally promote unionisation among local enterprises by training employers and employees alike in labour rights awareness and protection. Thus far they have persuaded employers to set up enterprise unions by arguing that an enterprise union would benefit management just as much as it would help workers.

Once workers better understood their legal rights, officials said, they would be able to stand up and defend those rights. Workers would quickly know when their rights and interests were infringed upon and would act promptly to address the issue. This might create conflicts initially but it would ultimately benefit both sides, one official said:

It is like a bell curve. At first both employers and employees know little. When they first get to know their rights and realise those rights have been violated, conflicts arise. Then employees and employers both have a better understanding of the situation and problems are gradually resolved and eliminated. In this way the curve returns to being a smooth line.

By helping to resolve labour issues, the Liyang union staff believed that enterprises would eventually come to better understand the role of the union.

The positive attitude of the Liyang officials is to be commended but structural problems in the union still need to be overcome. Like many other cities, Liyang claims to have set up an “early warning system” that can predict and pre-empt labour disputes in the region. This system, it is claimed, allows the union to move away from the traditional “firefighting” approach to labour relations and instead create a “fireproofing” system that could prevent conflict before it erupts. However, this early warning system is dependent on officials at the grassroots being in touch with workers, understanding their problems and immediately reporting potential conflicts and flashpoints to their colleagues in the municipal union who can then discuss the appropriate response. Crucially however, the system does not currently utilize the power of workers themselves to monitor and report labour rights violations. As a result, many problems go undetected until it is too late. One official concluded:

In my personal opinion, workers used to trust the trade union a lot more in the past. Now everything has changed. Now it is far easier to promote action and campaigns in the name of the local government. The government’s brand is much bigger and more useful than the trade union’s brand. The trade union is just a mass organization, it does not have the power or influence of a government department.

Please see our analysis of the eight cases in Jiangsu in September 2018 工会改革观察与促进 第二期（2018年9月 and the full transcript of the Liyang case interviews 2018-09-15 江苏省常州溧阳市，一家汽车零部件制造公司拖欠工人工资和社保，工人威胁跳楼讨薪 for more details.