In his first public statement since his detention in May 2017, Fu Tianbo, one of the leaders of the agency workers’ campaign for equal pay at FAW-Volkswagen in Changchun, has vowed to continue his fight for justice.

In his first public statement since his detention in May 2017, Fu Tianbo, one of the leaders of the agency workers’ campaign for equal pay at FAW-Volkswagen in Changchun, has vowed to continue his fight for justice.

Fu, who was elected as a representative of the 3,000 agency workers at the Sino-German car giant in November 2016, was charged in 2017 with “gathering a crowd to disrupt public order” after organizing a protest at the car plant in February that year. 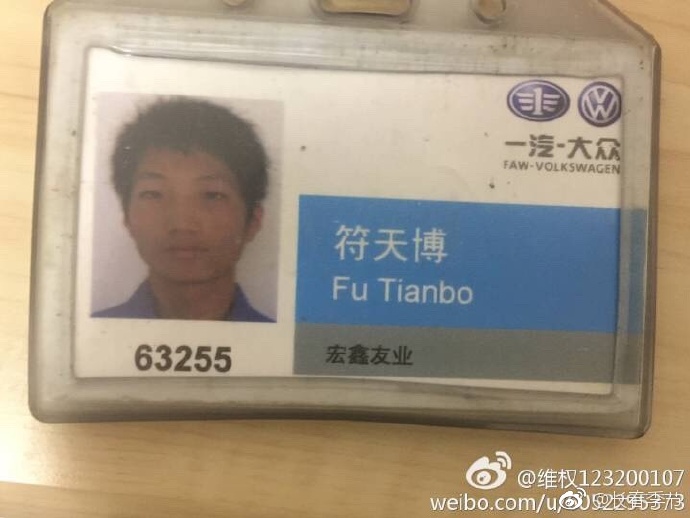 During his trial at the Changchun Automotive Technological Development Zone Court in November last year, Fu was found guilty of the offence but was exempted from criminal punishment.

Fu initially kept a low profile after the trial but on 21 February 2019, he issued a brief statement on Weibo (linked to the Changchun Intermediate Court) saying “Upon my return, I am still young. The journey has just begun.” It is understood that Fu is now planning to appeal the guilty verdict as well as sue his former employer for unfair dismissal.

Throughout his detention, Fu’s colleagues continued their collective struggle and won a partial victory at the end of 2017 when the agency workers at FAW-Volkswagen, many of who had been employed for a decade or more, were finally offered formal employment contracts.

However, the workers were given just 24 hours to study and sign the contracts, which included clauses preventing them from pursuing any further legal action against the company.

Those workers who did sign the new contracts soon discovered that their pay was still lower than their colleagues who had always been directly employed at FAW-Volkswagen. The basic salary of the “new” employees was 1,762 yuan a month, just about the minimum wage in Changchun, while other workers in the same position, who had always been formal employees, had a basic wage of between 2,600 yuan and 2,700 yuan a month.

The workers who refused to sign new contracts were recategorized as contractors (外包工), an even more tenuous position than agency worker. Some workers are demanding to made formal employees, while some of the older workers have already been laid off with apparently limited compensation.

The workers staged a new round of protests in September and October 2018, taking their complaints to the municipal government, the procuracy and the discipline inspection committee. The workers also approached both the enterprise and local trade unions but, so far, they have received little positive feedback.