Four months in, there has been a lot of talk about the Sino-US trade war but so far there has been no commensurate increase in collective action by China’s factory workers.

Four months in, there has been a lot of talk about the Sino-US trade war but so far there has been no commensurate increase in collective action by China’s factory workers.

Several hundred, possibly thousands of temporary workers at the massive Biel Crystal factory complex in Huizhou, Guangdong province, staged mass protests at layoffs and wage arrears on 9 November after orders for mobile phone screens were suddenly cancelled by a foreign buyer, a move that was seen as directly related to the trade war, but the majority of recent factory protests have no direct connection. 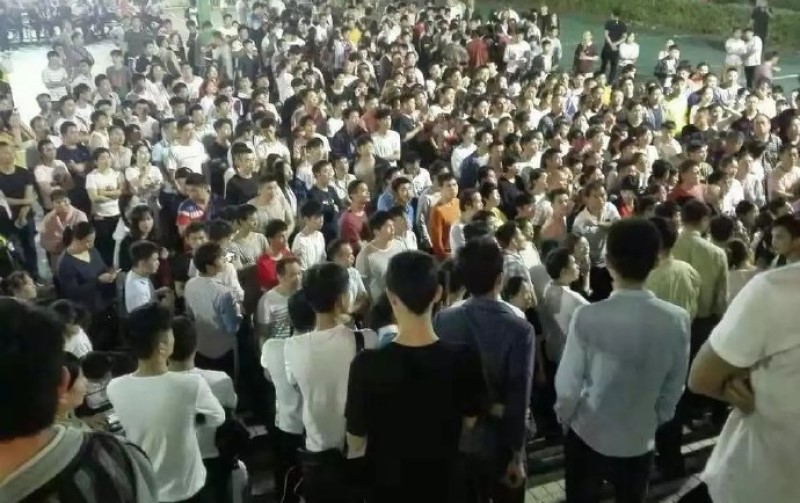 Workers at Biel Crystal, Huizhou, gather in protest at wage arrears and layoffs

Several bankruptcies of major companies in the latter half of the year, for example in Shandong, Dongguan and Shenzhen, were also attributed to the trade war. However, manufacturing in China has been in relative decline for many years and tens of thousands of major factories had already closed or relocated as the market evolved and fluctuated according to international and domestic demand.

It is possible that the trade war helped push some companies over the edge but it would be an exaggeration to say it was a major factor. Moreover, factory closures and layoffs do not necessarily lead to worker protests. If outstanding wages are paid in full and social insurance contributions are up to date, it is unlikely that there will be collective protests simply because the workers were made redundant.

It is estimated that two million workers lost their jobs in the first half of the year but new employment opportunities, particularly in the service industries are opening up all the time. As such, the unemployment rate in China’s cities has remained relatively stable this year, fluctuating between 4.8 percent and 5.1 percent in the first nine months.

Data from CLB’s Strike Map shows that there has been no noticeable increase in the number of strikes and collective protests by factory workers since the onset of the trade war. There were 219 incidents in the manufacturing sector during the first ten months of this year, compared with 210 in the first ten months of 2017. In the last four months, since the imposition of tariffs in July, there have been 91 incidents, compared with 110 in the same period last year. See table below. 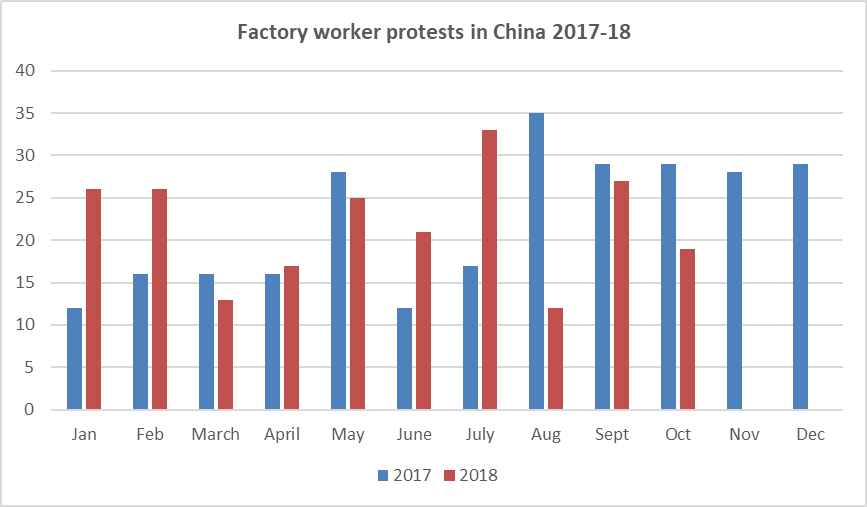 The monthly totals over the last two years, which vary from 12 to 35, show no clear pattern, except for a fairly regular occurrence of labour unrest in factories across China. The majority of factory worker protests have been located in the traditional manufacturing coastal provinces of Guangdong, Jiangsu and Shandong, but strikes are increasingly seen in the central and western provinces as well, suggesting that many of the factories where protests occur are not solely focused on exports.

Around 80 percent of the 486 factory protests recorded on the Strike Map since January 2017 included demands for wage arrears, 19 percent were related to factory closures or relocation, and 14 percent included demands for the payment of social insurance contributions.  Economic and trade factors certainly contributed to these protests but the key factor in all these disputes was the employer’s disregard for the fundamental labour rights of their employees.

When profits decline and businesses start to fail, employers will all too often try to cut their losses by cheating workers out of their pay, social insurance and other benefits. Typically, factory owners will reduce overtime and bonuses (essential for a living wage in China), delay wage payments, and then try to sell off factory inventory and machinery before suddenly closing the factory and disappearing, leaving workers with a mountain of debt.

Crucially, if local governments enforced labour laws more rigorously and the trade unions did a better job in representing workers’ interests, employers would not be able to delay payment of wages and social insurance, and a lot of these relatively straightforward disputes could be resolved before they escalated into strikes and protests.

One indirect effect of the slowdown in manufacturing that may, in coming months, be exacerbated by the Sino-US trade war is the funnelling of laid-off factory workers into low-paid, insecure and often dangerous jobs in emerging service industries. It is these industries that are now increasingly the focus of worker protests in China.  Of the 1,444 incidents recorded on the Strike Map in the first ten months of this year, 238 were in services and retail, and another 224 were in transport industries that are now dominated by new online services such as Didi, Meituan, Full Truck Alliance and Lalamove.

As these new businesses absorb more and more of the workforce laid-off from the manufacturing sector, we would expect to see a greater number of strikes and protests over low pay, lack of benefits, long working hours and lack of job security.

The government is also encouraging laid-off workers to set up their own small businesses.  Migrant workers in particular are being given subsides, tax breaks and other financial incentives to “return home and start-up” their own company. However, competition in emerging markets is fierce and many of these start-ups will eventually fail, leaving would-be entrepreneurs in a worse economic position than before.

In the next few months, we may see more protests from factory workers who are feeling the effects of the trade war but we should not just pin the blame on Sino-US trade tensions. The key issue remains the fundamental imbalance of power in labour relations in China that allows employers to pass all the costs of an economic downturn onto their employees with no regard for their basic labour rights.