The All-China Federation of Trade Unions’ (ACFTU) showcase event, its five-yearly National Congress, got underway in Beijing this morning.

The All-China Federation of Trade Unions’ (ACFTU) showcase event, its five-yearly National Congress, got underway in Beijing this morning.

The week-long meeting of the 17th ACFTU National Congress is expected to be a largely ceremonial and self-congratulatory affair that once again demonstrates the union’s loyalty to the Communist Party and General Secretary Xi Jinping.

However, this high-profile gathering should in fact be focusing on the real problems that face China’s workers on a day-to-day basis, and the obvious short-comings the union has so far exhibited in dealing with them. The widespread collective protests by workers across the whole of China clearly highlight the ACFTU’s deficiencies in representing workers, protecting their rights and interests, and in resolving labour conflicts.

China Labour Bulletin’s Strike Map recorded 1,332 strikes and collective protests by workers in the first nine months of the year, the vast majority of which were the result of employers’ flagrant violation of workers’ rights, such as the failure to pay wages, social insurance contributions or compensation to laid-off workers.

Demands for wage arrears occurred in 1,075 of the cases recorded on the map, or 80.7 percent of the total. The problem was particularly severe in the construction industry, which accounted for nearly half of all the collective protests in the first nine months, but was also apparent in manufacturing, as factories closed down or relocated, as well as in service industries, as new businesses folded under the intense pressure of market competition. 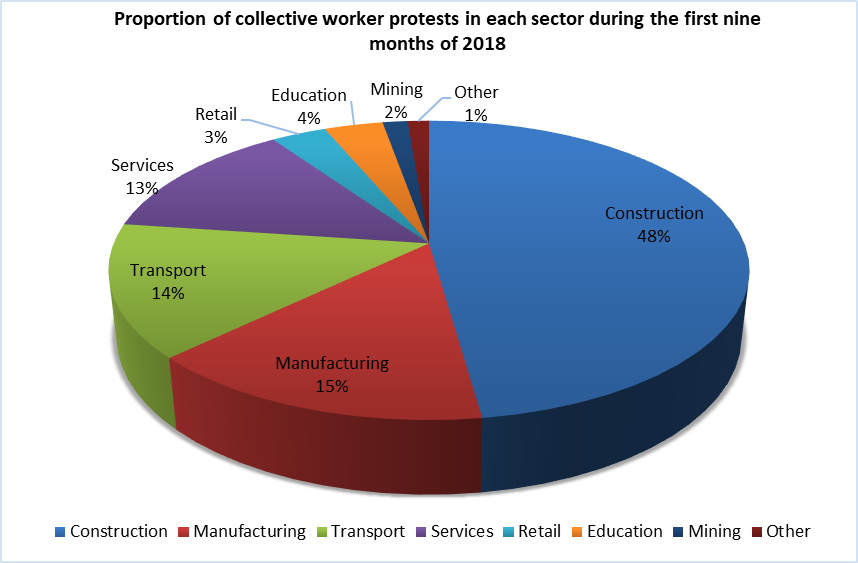 As noted in CLB’s report on the workers’ movement in China  (中国工人运动观察报告2015-2017), the construction industry has long been a huge embarrassment for the ACFTU in terms of organizing. After decades of flagrant rights abuses, union officials are still at a loss as how to bring construction workers into the union and protect their fundamental rights. Instead trade union officials prefer to blame the multiple layers of subcontracting, the high mobility and seasonality of labour, and the alleged incompetence of workers, for their own failure to organize the industry.

The ACFTU has attempted to extend its reach in the transport and logistics industry by recruiting truck drivers and food-delivery workers but as the Strike Map shows, strikes and protests by drivers are still a regular occurrence, and accounted for 14 percent of all collective protests in the first nine months of the year. Many drivers complained that their incomes had stagnated or had actually declined to the point that they could no longer make a living.

As the manufacturing sector continues to decline, many factories are struggling to survive and are defaulting on wages, cutting bonuses and reducing overtime. The failure of the union to protect factory workers’ interests was dramatically highlighted during the summer when employees of Jasic Technology in Shenzhen tried to unionize. The local trade union reportedly colluded with management to block the worker activists organizing attempts, ultimately leading to the workers’ dismissal and detention by local police.

Likewise, in the north-eastern city of Changchun, workers at FAW-Volkswagen have been campaigning for the best part of two years for equal pay for equal work and the right to be hired on direct employment contracts with the car manufacturer with proper benefits but, thus far, the union has done little or nothing to help.

In the service and retail sectors, which when combined accounted for 16 percent of all protests in the first nine months, workers are hopelessly under-represented by the union because they are often hired as agency workers or individual contractors rather than employees, and the union, which focuses on organizing inside enterprises, is still floundering when it comes to the gig economy.

And even when there is a union in place, such as at retail giant Walmart, it has deliberately excluded those worker activists who are dedicated to improving the pay and conditions of their co-workers. See CLB’s report, China’s Walmart workers: Creating an opportunity for genuine trade unionism, for more details.