In the final English-language extract from CLB’s report on the workers’ movement, we evaluate the ACFTU’s reform measures, identify the problems that need to be fixed and recommend a path for the union to follow.

In this final English-language extract from CLB’s new report on the workers’ movement in China (中国工人运动观察报告2015-2017) we evaluate the reform measures implemented so far by the All-China Federation of Trade Unions (ACFTU), identify the problems that still need to be resolved and offer some suggestions on the most productive path to follow in the future. For the Chinese original please see pages 38-43 of the report, beginning at the heading 对全总改革成果的评议.

Worker activist Mi Jiuping, who led the campaign to set up a trade union at Jasic Technology in Shenzhen.

Evaluating the reforms of the All-China Federation of Trade Unions

The focus of the ACFTU’s institutional reform has been to divert more human and material resources to grassroots and local level unions, for example, the promotion of model workers to union leadership roles, increases in the budget allocations for grassroots unions and the assignment of higher-level union cadres to strengthen the ranks of lower-level unions. The ACFTU claims this reform initiative is already a great success but in devoting more resources to local unions, the ACFTU has crucially stopped short of the frontline of labour relations, the enterprise union. This is actually the “last mile” between the trade union and China’s workers. If the ACFTU stays outside the enterprise gates, and does not emphasise union organizing within enterprises in order to establish a collective bargaining mechanism to improve workers’ livelihoods, it will never be able to bridge the gap with workers and achieve the Party’s stated goal of “increasing workers’ participation, workers’ cohesion and workers’ unity.”

The “Gucun experience” (discussed here) and online union membership application systems are some of the ACFTU’s fresh ideas to broaden its membership base and reach workers in the gig economy and other emerging areas of employment. These reforms are noteworthy in that they break with the limitations imposed by the Trade Union Law and the Constitution of the All-China Federation of Trade Unions, which regard the enterprise as the basic union organizing unit, and instead allow workers outside the enterprise to unionise. To a certain extent these measures have helped alleviate some of the traditional obstacles to organizing and recruitment such as opposition from company management.

However, the ACFTU’s efforts to increase membership are still conducted in the style of political campaigns: local unions at different levels focus their resources to organise grassroots unions within a specified time frame while increasing membership at the same time. This top-down membership target-setting, which lower-level unions rush to comply with, is clearly not a rational and organic approach to union membership, and is precisely why the ACFTU’s unionisation statistics should be taken with a pinch of salt. Even the glorified “Gucun experience” really achieves nothing more than meeting a statistical target, without moving on to the important work of establishing a collective bargaining mechanism.

Real union organizing and membership increases cannot be achieved through intensive campaigning. To illustrate this point, after 40,000 workers at the Yue Yuen Shoe Factory in Guangdong went on strike in April 2014, the provincial union dispatched a major taskforce to reorganize unions in the Yue Yuen factory complex and 35 other privately-owned factories in the Dongguan area. This task force spent half a year in Dongguan providing guidance on every step in the process of union organizing to these factories, then the provincial union promoted this “grassroots union organizing standard procedure” as a model to be followed. But after establishing this model, no follow-up action was taken in Guangdong. Based on this level of efficiency, even if all of the ACFTU’s full-time staff dedicated themselves to nothing but organizing, they would still only scratch the surface of the more than 5.6 million private and foreign-owned companies in China. That is precisely the reason why the union should rely on the workers in those enterprises to do the organizing themselves, with the local and provincial unions providing the necessary assistance in terms of advice and resources.

The ACFTU has largely blamed its inability to make any real progress in grassroots union organizing and recruitment on a lack of Party support, poor performances by individual officials, insufficient human resources and having too many other government responsibilities. In fact, the real cause lies in the ossified mentality of union officials and their excessive dependency on the Party and government for support. If union officials realised that the source of strength for effective union organizing and increasing membership is the workers themselves, their work would not have stagnated for so long.

ACFTU staff need to stop providing superficial and frivolous services, like sending out seasonal gifts to workers, they need to stop manipulating statistics in an attempt to comply with directives from their superiors and stop devoting their time and effort to convincing business owners to let them establish enterprise unions. Instead they need to do something they have never felt comfortable doing, actually representing workers’ interests in the workplace.

Collective consultations, in the ACFTU’s lexicon, refers only to wage negotiations; important aspects of the bargaining process such as work safety, benefits and working conditions are nearly always excluded, making any collective agreement limited in scope. Collective agreements are usually pro forma documents with little relevance to workers actual conditions. Indeed, studies have shown that in some cases migrant worker incomes have actually fallen in real terms after collective consultations have been concluded.

The persistence and intensity of workers’ protests and strikes during the period covered by this report is solid evidence that the ACFTU’s collective consultations system has so far failed to contribute to a more equitable distribution of wealth in China or help establish a collective labour relations mechanism that is conductive to reducing labour unrest.

The reason for this failure is rooted in the ACFTU’s chronic distrust of workers. Union officials regard the working class as lacking in legal knowledge, organizing and bargaining skills, and they fear that if workers are actually allowed to bargain directly with management, the negotiations could get heated and the workers could go out on strike.  Another key factor is the collective consultation system’s limitation to wages alone. Real collective bargaining needs to include social insurance, working conditions, working hours, benefits and other issues of importance to workers. Without a comprehensive collective agreement, workers’ interests’ can never be fully protected.

In the current reform initiative, the ACFTU has stressed the importance of protecting workers’ rights. These efforts have undoubtedly helped workers in need but they are still premised on taking action only after the damage has already been done. The ACFTU and its local offices, for example, devote a huge amount of time and resources to recovering wage arrears owed to migrant workers. What they should be doing of course is making sure workers are paid on time and in full every month as prescribed by law. The ACFTU needs to adjust its strategy to focus on organizing enterprise unions and developing worker leaders to achieve the dual target of minimising the risk of rights violations in the workplace and the early detection and resolution of violations, thereby avoiding the escalation of labour unrest.

The current collective consultation system is utterly useless in this regard because most worker demands fall outside of its very limited framework. Worse still, it perpetuates the stereotypes of the “yellow union” and “the union always sides with management,” which are already deeply ingrained in the minds of China’s workers.

The ACFTU’s stress on only redressing workers’ rights after they have been violated is one of the reasons why we continue to see widespread worker unrest in China. The only way to really address the root causes of labour unrest in the workplace is through genuine collective bargaining that compels employers to treat workers with respect and paves the way to a fairer distribution of income and benefits for all employees.

It is clear from the above analysis that while the ACFTU claims to have achieved “remarkable success” in trade union reform, the rights of workers have not improved and collective protests remain widespread and commonplace. Even as the Party faces a crisis of legitimacy, the basic nature of trade union officials remains unchanged. Trade union reform has thus far failed to address the ACFTU’s own identity crisis or the Party’s legitimacy crisis, let alone the fundamental issue of how to ensure workers can earn a decent wage.

To properly address these issues, the ACFTU needs to revert to being a representative of labour and represent workers in collective bargaining so that they can obtain a decent wage and benefits and guarantee a safe working environment. Specifically, the ACFTU needs to bolster enterprise trade unions so that they can bargain effectively and ensure workers obtain a reasonable share of the company profits.

In response to the current state of labour relations in China, the Party has proposed two goals, “eliminating the four impediments” (namely regimentation, bureaucratisation, elitism and frivolousness) in the ACFTU’s work, and “increasing the three attributes” (political consciousness, progressiveness, popular legitimacy) of the ACFTU. The success or otherwise of the first goal is based on reforming the workstyle of union officials and can be measured, for example, by the number of model workers promoted to positions of leadership within the ACFTU and local unions, the amount of funds directed to grassroots trade unions, the number of grassroots unions established, the number of migrant workers recruited, and the number of labour rights centres established.  For the second goal, it is a question of union identity, specifically are socialist values ingrained in officials at all levels of the organization? This of course is difficult to quantify in the short-term.

These two goals are closely related. The four impediments are clearly a major problem but getting rid of them is tied up with trade union officials’ lack of the three attributes. In order to further promote the workers’ movement in China, trade union officials need to possess the three attributes of political consciousness, progressiveness, and popular legitimacy. They need to be imbued with socialist ideals so that they can represent workers on the basis of a shared class awareness and values, they must demonstrate initiative in pushing for and successfully concluding collective bargaining, and they must concentrate on local organizing so that they stay true to the real needs of ordinary workers.

After two years of largely superficial trade union reform, it is time for the ACFTU to venture out of the shallows and into the uncharted waters of genuine reform. In order to do this, the union needs to get back to basics and focus on organizing workers within enterprises and resolving conflicts through collective bargaining so that workers can share in the benefits of economic development. Labour NGOs have already shown the way forward in this regard but such organizations are limited in what they can achieve. The ACFTU on the other hand has almost unlimited resources, and if it adopts the model created by labour NGOs, it can make a huge difference in the development of a formal collective bargaining mechanism in China.

CLB offers the following suggestions for deepening reform of the ACFTU, which will help wean union officials off their dependence on Party and government support, and create a regional and industrial trade union structure that can facilitate genuine collective bargaining.

Once completed, over a period of many years, the reorganization of the ACFTU would ideally look something like the diagram below, a structure that stands in marked contrast to the current rigid vertical hierarchy of the ACFTU, which is designed to exert Party control rather than worker participation. The new structure would be based on integrated, horizontal interactions designed to facilitate collective bargaining in enterprises, across industries in individual provinces and eventually the country as a whole. 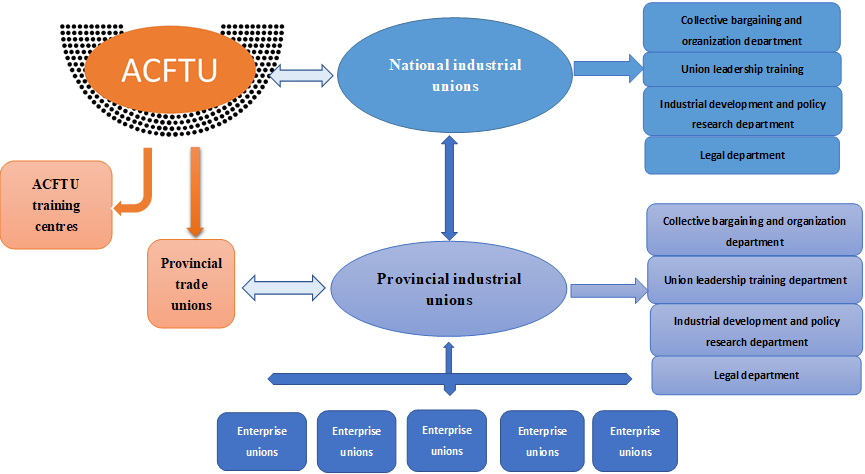