Chinese tech giant Alibaba triumphantly announced a new transaction record of 213.5 billion yuan for this year’s Double Eleven shopping festival, a 27 percent increase over 2017 and more than 4,000 times the amount spent during the event’s first year in 2009.

With headlines such as “Double Eleven: A window into China’s consumption power” Chinese official media like CCTV celebrated the online shopping spree, emphasising the importance of domestic consumption as a “significant driving force in China’s economy” and prasing e-commerce as offering “new paths for poverty alleviation.”

However, behind the e-commerce boom are millions of delivery workers making sure packages reach their final destination and countless migrant workers who believed in the promise of earning money by helping develop rural China and left the cities to set up Rural Taobao Stores in their hometowns. 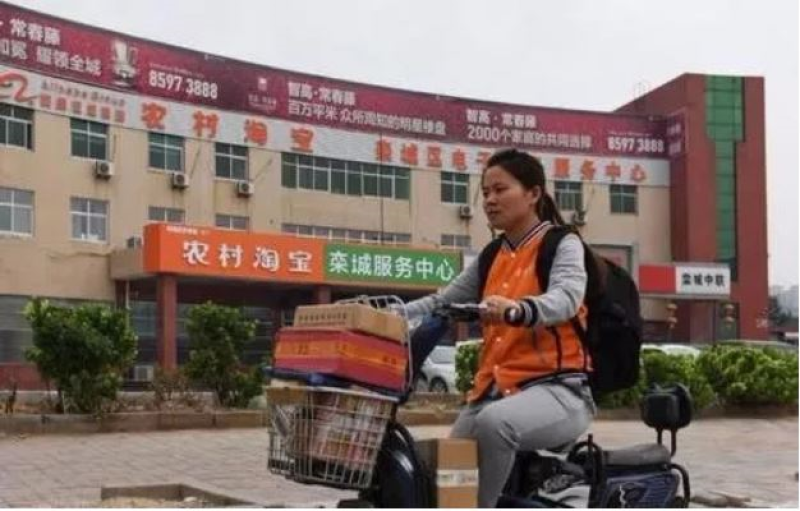 A Taobao store in rural China

Millions of workers have been sorting and delivering mountains of packages for more than a week now, all of them racing around the clock and defying sub-zero temperatures to make sure packages reach their final destination on time. Overwork and excessive penalties for delays plus cold bread for dinner are part of the daily routine these workers hope to get over as soon as possible.

According to a report by Urban Workers on the Road, during the Double Eleven peak season, workers have to process on average 1,000 packages a day, five times more than usual but pay package remains at just one yuan, while the penalty for delayed delivery is 30 yuan and a customer complaint costs the worker 200 yuan. Worse still, workers are even made responsible for packages that got lost in the system before reaching their sorting stations.

Among 100,000 workers at JD.com, a leading online retailer in China, were hundreds of vocational school students working 12 to 16-hour shifts, sometimes through the night, at sorting facilities in Beijing and Kunshan for less than the minimum wage. Zhang Yingjin, a student from the Rizhao Science and Technology School in Shandong, told the Financial Times that he was paid 14 yuan per hour at a JD.com facility in Kunshan. If the students refused to take the work, the school threatened not to let them graduate. Just last February JD.com CEO Richard Liu, claimed that his company signed “formal labour contracts with every staff, every security guard, every cleaner, every delivery worker,”

Party General Secretary Xi Jinping vowed to create a “moderately prosperous society” and eradicate absolute poverty by 2020, but as the deadline approaches, over 56 million people are still living below the national income standard of 2,300 yuan per year. Part of the government’s poverty alleviation strategy has been the expansion of e-business in rural areas and state media has claimed that by the end of 2016, e-commerce had already brought “jobs to more than 20 million people” at “8.32 million rural online stores.” CCTV claimed moreover: “The promising prospects of rural e-commerce has also attracted young migrant workers to return to work in their hometowns.”

Alibaba announced in 2016 it planned to establish outlets in 100,000 rural villages within five years, enabling rural residents “access to a broader variety of goods and services” while providing farmers with a platform to “earn more by selling agricultural products directly to urban consumers.”

Lu Wei has a more nuanced story to tell. A migrant worker who spent a decade working in factories in coastal areas, Lu decided in 2016 to take part in Alibaba’s grand plan to “make a better rural China” by returning to his hometown in the northwestern province of Gansu and establish a Rural Taobao Store. “I felt Rural Taobao could help fellow villagers to develop our economy, we could make more money through entrepreneurship,” wrote Lu.

Although initial preferential subsidies and commission rates did not add up to the same income Lu could make in a factory, the monthly income of up to 3,000 yuan was enough for a decent rural lifestyle. Alibaba, through attractive packages for store owners, of course wanted to increase its footprint as quickly as possible, but soon enough things changed: a minimum sales target for each Rural Taobao Store was put in place, all merchants were also required to upgrade their physical store fronts according to standard specifications, owners had to source all the hardware from Alibaba.

In 2018 Alibaba further cut commissions to one to two percent. “To maintain the same level of income, I had to increase sales volume by a factor of ten,” Lu said. That was the final straw for Lu who has now returned to factory work in Zhejiang with his wife. Together they now earn at least 6,000 yuan per month after losing 30,000 yuan during his two years of Taobao entrepreneurship.

Lu is convinced that there never was a plan to help develop local agriculture by establishing a channel for direct sales into China’s cities, instead the plan always was to “sell more products into rural villages.”

Purchasing power in inland rural areas like Gansu, stresses Lu, cannot compare to coastal urban areas, particularly because most younger people of working age have left their original villages, leaving behind the elderly and the children. “My only regret now is that we have left our two kids behind, they will have to grow up with their grandparents.”