Truck driver Jin Deqiang took his own life on 5 April after he was fined 2,000 yuan for driving while his satellite positioning system was offline. Jin was stopped at a checkpoint in Tangshan, Hebei. After officials insisted he pay a fine, Jin drank a bottle of pesticide.

Truck driver Jin Deqiang took his own life on 5 April after he was fined 2,000 yuan for driving while his satellite positioning system was offline. Jin was stopped at a checkpoint in Tangshan, Hebei. After officials insisted he pay a fine, Jin drank a bottle of pesticide.

With only 6,000 yuan in savings, three children, and a mother in her 70s to support, 51-year-old Jin left a suicide note saying that he hoped that the authorities would take this matter seriously. He added that, working as a truck driver for the last ten years, he “had not saved much, but had incurred many illnesses.”

A report into the working conditions of truck drivers found that sitting upright for long periods and their irregular schedules means that they have a much lower life expectancy and a higher risk of chronic illness. 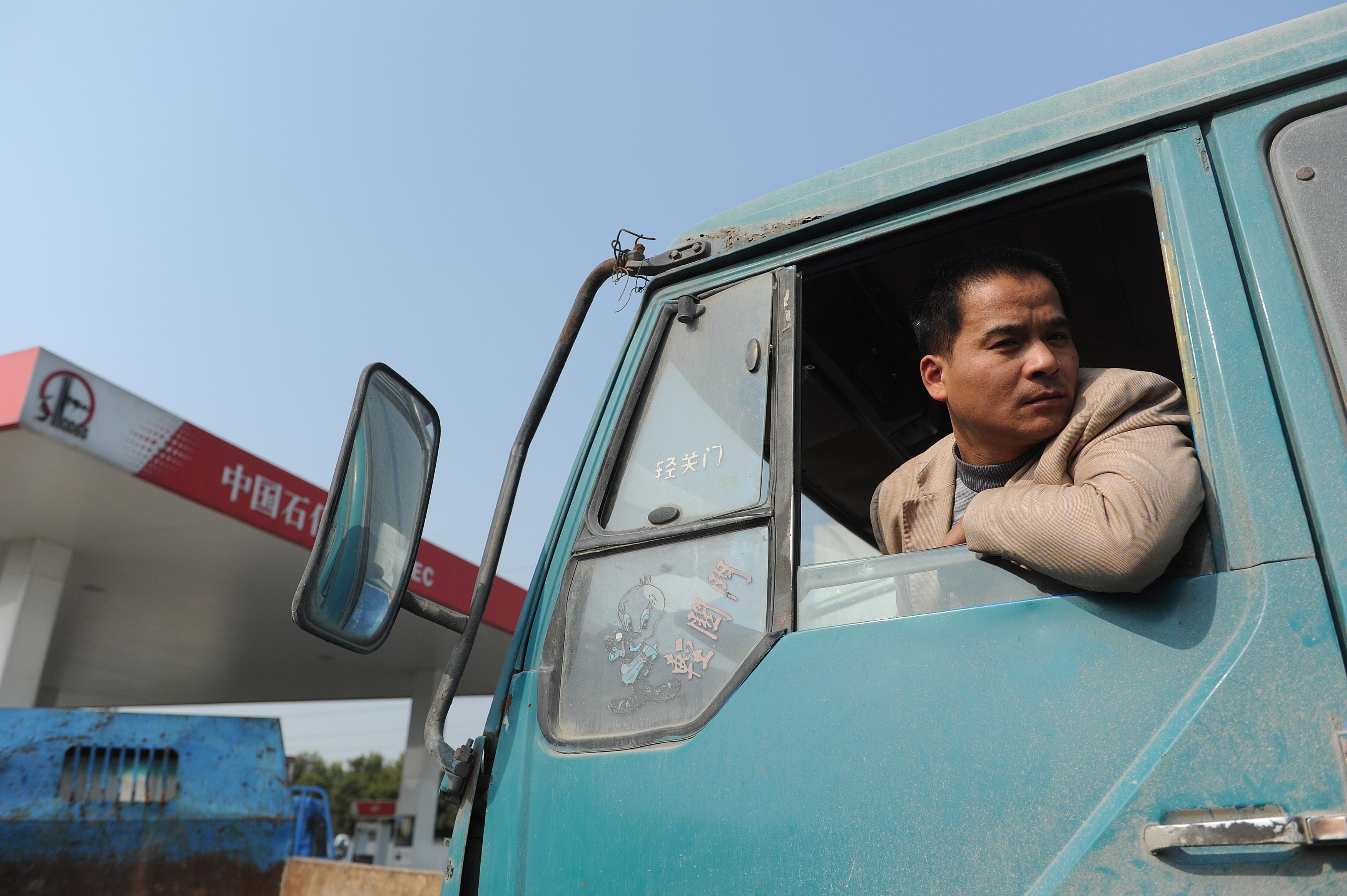 The State Council mandated the installation of smart monitoring in trucks in 2016, ostensibly to eliminate road accidents. Implementing measures issued by the Ministry of Transport state that drivers tampering with satellite tracking devices will be fined 2,000 to 5,000 yuan.

Drivers have to purchase and install the Beidou positioning software (which shares a name with the navigation satellite system developed by the government) in their trucks. However, many of these devices are of poor quality and need to be replaced after a year or so. In addition to paying an installation fee, drivers must pay service fees of 600 to 1,200 yuan, and some also pay training fees.

Each driver’s travel history is saved for three months, and, as Caixin reports, the data is uploaded to Qianfang Technology, the only big data analytics company the Ministry of Transport has designated to process such data. Each driver’s data is used to help build China’s smart cities, but truck drivers receive no benefit from contributing, only the additional cost burden of complying with the system.

Truck drivers are taking to social media to comment on Jin’s case and complain about Beidou’s tracking system. In a video viewed over 800,000 times on Weibo, one driver says of the tracking system that “many areas use it to do outrageous things” and calls it a “punishment tool.” He adds that non-payment of fines leads to trucks being confiscated.

Another video, which has since been deleted, compared the mandatory requirement to use the positioning system to buying a phone and having to pay when it can’t place calls. The hashtag “truck drivers have something to say” (货车司机有话要说) has been blocked on Weibo.

Truck drivers, who are responsible for transporting 75% of China’s cargo, are primarily independent operators who have taken out substantial loans to pay for their vehicles. Any additional costs, such as those from the Beidou system, eat further into their razor-thin margins.

In 2018, drivers staged a series of protests across the country to demand that the government and haulage operators take action on excessive highway tolls, low haulage rates, high maintenance and fuel costs, and arbitrary fines by traffic  police. But little has changed, and the costs just keep piling up.

The All-China Federation of Trade Unions says it prioritises organising truck drivers, but so far it has done very little to put pressure on the authorities or the haulage operators to give truck drivers a better deal.

For example, the union could and should argue for much greater leniency in the handling of the fines and penalties that truck drivers are currently forced to pay. The union could also propose that the government provide drivers with an allowance to purchase Beidou equipment and impose greater quality control standards on the producers of that equipment.

Today the long-distance haulage market is dominated by Manbang, China’s so-called Uber for trucks. Manbang, which is valued at US$30 billion, sets haulage rates for truck drivers but does nothing for them in terms of defraying costs. The union should put pressure on Manbang to recognise its drivers’ employment status and offer related equipment, insurance, and other benefits.