There have been at least eight strikes and protests by sanitation workers in cities across China since 1 May this year, accounting for ten percent of all service sector incidents recorded on CLB’s Strike Map.

The summer months can be particularly difficult for sanitation workers in China. They have to work long hours with little rest in excessive heat for minimal pay, and are often owed wages in arrears and denied basic benefits such as the high temperature allowance.

There have been at least eight strikes and protests by sanitation workers in cities across China since 1 May this year, accounting for ten percent of all service sector incidents recorded on CLB’s Strike Map.

In the most recent incident, on 10 August, a group of sanitation workers in Qi County, Henan, had no option but to stage a demonstration after their wages had been delayed for about eight months. They worked for a private company that had won the street cleaning contract from the county government but, in the end, it was the local government that paid the wages owed.

Nearly all local governments contract out sanitation work to private companies and many of these companies push their workforce, usually elderly migrant workers, to the limit.

When a property management company in Zhengzhou, the provincial capital of Henan, took over one government contract, managers increased shifts from eight hours to more than 12 hours and reduced the number of workers assigned to clean each section of road.

Workers had earned 2,598 yuan a month for an eight-hour shift but that only increased to 2,998 yuan a month after working 12 and half hours each day.

Moreover, the company introduced a harsh new system of performance-related fines that reduced the workers’ meagre income even further. “One cigarette butt that is not collected can cost you several hundred yuan,” one worker said. 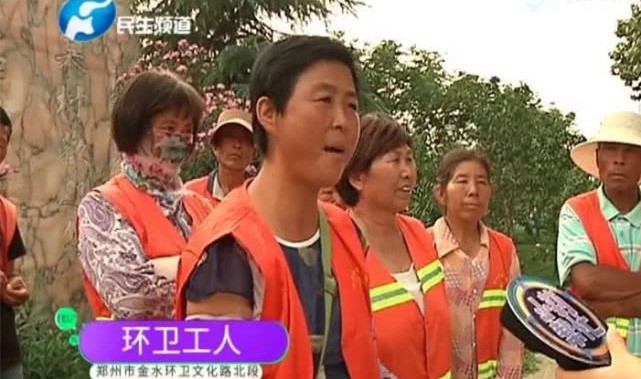 By 7 July, the workers had had enough and went out on strike. See above photograph. Local journalists present at the scene interviewed company managers who defended their system of fines and quotas, saying the workers were lazy and needed disciplining. “If you can’t accept company rules, I’m sorry but you can go somewhere else,” one manager told the workers.

Another company in the nearby city of Xinyang only paid workers just 1,450 yuan a month, although their contracted wage was 1,700 yuan. The company had reportedly been involved in 13 labour dispute cases over the last two years, with the most recent in April this year.

This kind of abusive and exploitative management style is not uncommon in sanitation companies. One company in Nanjing orced workers to wear GPS trackers in order to monitor their movements and issue an alarm if they remained stationary on a break for more than 20 minutes.

In the port city of Qingdao last week, one company manager was caught on camera verbally abusing a group of elderly sanitation workers for their poor performance. The manager was later reprimanded and the company gave assurances that such abuses would not occur again. However, it is unlikely such assurance would have been made if the incident had not been filmed and posted on Chinese social media.

Sanitation workers are vulnerable to exploitation and abusive management because street cleaning and garbage collection is often the only employment open to elderly and poorly educated migrant workers, particularly elderly women workers. However, these workers have for many years been determined to fightback and take collective action to defend their rights and protect their livelihoods, as illustrated by the Guangzhou University Town sanitation workers’ strike of 2014.