In the second major accident in China’s chemical industry this week, two people died after a fire broke out yesterday at the Huludao Tianqi Shengye Chemical plant in the north-eastern province of Liaoning.

In the second major accident in China’s chemical industry this week, two people died after a fire broke out yesterday at the Huludao Tianqi Shengye Chemical plant in the north-eastern province of Liaoning. The cause of the accident is still under investigation.

Six days earlier, an explosion at a gasification plant in the central province of Henan left at least 15 people dead with hundreds injured, 15 critically, according to official media reports.

The plant owned by the Henan Coal Gas Group had won numerous accolades including an award last year from the China Chemical Products Safety Association for its “outstanding contribution to the standardisation of the safe production of hazardous chemical products.”

Just a few days before the explosion on 19 July, the plant in the city of Yima, near Sanmenxia, had been inspected by local safety officials and was still listed as one of Henan’s top 72 enterprises in terms of risk prevention.

As with numerous other accidents in China’ chemical industry, government inspections either failed to uncover hazards or the enterprise management failed to take the necessary rectification measures when hazards were identified.

Following the massive explosion at the Tianjiayi Chemical Co. plant near Yancheng in Jiangsu that killed at least 78 people on 21 March this year, it was revealed that the facility had been cited the previous year for 13 safety violations by the then State Administration of Work Safety. These violations included a lack of qualified personnel, insufficient safety training, lack of clear safety protocols, poor quality control, poor signage, chemical tank leakages, neglect of fire hazards, etc.

Another explosion at the Hebei Shenghua Chemical Co plant that killed 22 people on 28 November 2018, likewise, followed a government inspection in 2015 that revealed numerous problems with the plant’s storage facilities and noted that the management’s approach to safety was at best inadequate.

In the aftermath of the explosion at a hazardous materials warehouse in Tianjin that killed 173 people on 12 August 2015, the central government in Beijing demanded that strict measures be taken to ensure that all potentially hazardous chemical facilities in China were located a safe distance from residential areas.

The following year, a government inspection of the Yima plant highlighted the fact that the facility posed a “significant risk” to a nearby residential area. However, nothing was apparently done to relocate homes, businesses and schools in the potential blast zone. 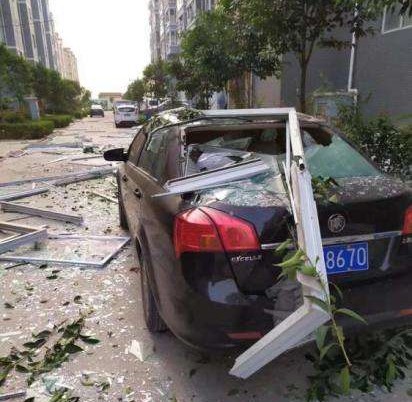 Damage caused by the explosion in a residential district of Yima. Chinanews.com

There was indeed substantial damage to commercial and residential property after the 19 July explosion with hundreds of local residents injured by flying glass and other debris. A local school was in the blast zone and only avoided casualties because the students were on their summer vacation.

One elderly resident, Cao Sihua, lived just 500 metres from the gasification plant. He described to China National Radio how:

“The house just collapsed. My wife had to climb out through the window with our grandchild because the door was completely blocked. The back wall was destroyed and I had dozens of stitches in my head and neck.”

China Labour Bulletin’s Work Accident Map has recorded 34 deadly fires and explosions in chemical plants and storage facilities since the Tianjin tragedy four years ago. Clearly, the government’s reliance on inspections and other administrative measures has had a limited impact on safety. There needs to be a new approach that involves workers, the trade union, nearby residents’ groups and all other stakeholders to ensure no more tragedies occur in the future.