Officially, 943 million people in China have a pension. For most people however its value is minimal and the system will need broad reform if workers born in the 1980s are going to be guaranteed retirement protection.

An impressive total of 943 million people in China had some form of state-backed old-age pension coverage by the end of 2018, an increase of more than 27 million over the previous year, according to the
Ministry of Human Relations and Social Security (MOHRSS).

A closer look at the MOHRSS figures however shows that most people are only covered by the government’s urban and rural residents pension scheme, which currently offers only a minimal pay-out. Moreover, the main urban workers’ basic pension scheme is under growing financial pressure and could be completely depleted by as early as 2035 unless radical reforms are introduced.

A research report published by the Chinese Academy of Social Sciences (CASS) predicts that total expenditure from the urban workers’ basic pension fund will begin to exceed contributions in 2028 and that reserves will decline exponentially after that.

In 2018, according to the MOHRSS, there were 118 million retired employees in China receiving benefits totalling 4,465 billion yuan or around 37,840 yuan on average for the year, or 3,153 yuan per month, about half the national average wage for 2018.

In the same year, there were 301 million employees paying into the urban workers’ basic pension scheme. Total contributions to the scheme in 2018 reached 5,117 billion yuan or an average of 17,000 yuan per employee. 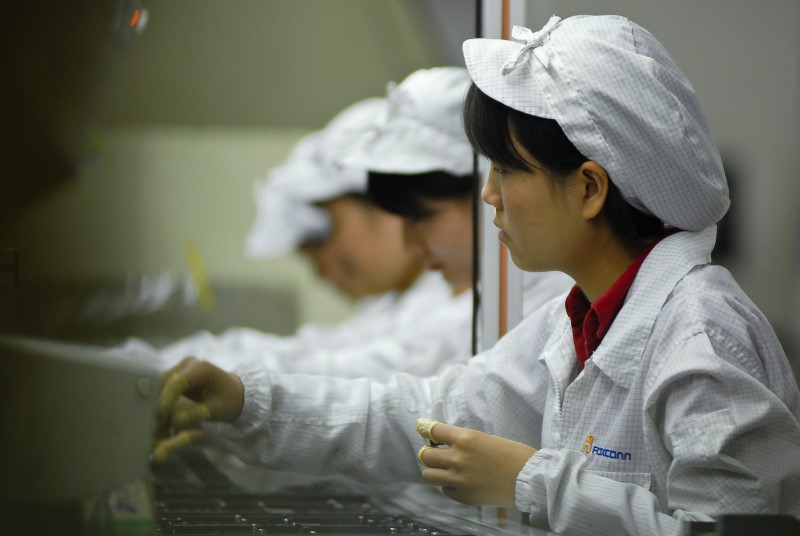 Foxconn workers on the assembly line

A total of 524 million persons were covered by the urban and rural residents pension scheme last year, with 159 million actually receiving benefit. Total benefits paid out under the scheme in 2018 reached 291 billion yuan or 1,830 yuan on average, which is equivalent to just 153 yuan per month, certainly not enough to live on even in the smallest towns.

While retired workers and those approaching retirement should be guaranteed pension protection, workers born in 1980s are increasingly concerned that the main state-backed pension scheme will no longer be able to provide for them when they retire.

Publicly, the MOHRSS says there is no reason to panic and that it has situation well under control. The government has introduced new policies to redistribute pension funds from the richer provinces such as Guangdong to poorer provinces such as Heilongjiang and Liaoning in the northeast of China that already have a pension shortfall.

The government has also stipulated this year that employers can reduce their contributions to the urban workers’ basic pension fund from a maximum of 20 percent to 16 percent. The move is a belated recognition of the fact that for decades employers have been underpaying or refusing to pay pension contributions at all. It is hoped the new lower rates will encourage employers to actually abide by the law.

China Labour Bulletin Executive Director Han Dongfang noted at the time that the Chinese government should be complimented for trying to relieve the burden on small and medium-sized enterprises but stressed that in the long-run, problems with the social insurance system could not be solved by administrative measures alone.

In the future, Han said, China’s trade unions should have an important role to play in the social insurance system by helping to devise and negotiate reasonable contribution rates for employers and employees in specific industries and regions.

“This will allow China to create an organic system in which the benefits and responsibilities of enterprises, workers and local governments are all balanced,” he said.